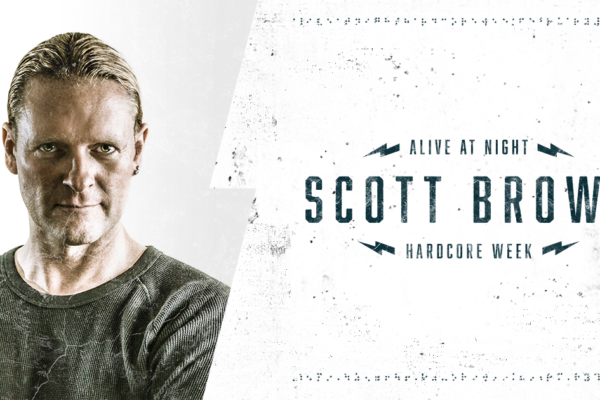 One of the most instantly recognisable names and faces in hard dance music since the very early days, Scott Brown is a true legend of the UK Hardcore scene.

Scott Brown is the man responsible for classic tracks such as “Now Is The Time”, “Turn Up The Music”, “Fly With You”, “Elysium” and literally hundreds more including many harder tracks such as “Black Magic” (with Neophyte) and “Capital Murder”.

Scott started his own label Evolution Records in 1994, which he still runs to this day with a release schedule that’s busy as ever. Last year alone, Scott brought us tracks ranging from the melodic “Touch The Sun” and “Reach For The Sky” through to the tough hard beats of “F**k What You Heard” and the huge “I Go Crazy” (with Re-Style and vocalist Ceci) plus a bit of everything in between!

From very early on in his career, Scott has also worked with various Dutch record labels, making him one of very few artists to be working in both the UK Hardcore and Dutch Hardcore scenes simultaneously.

Scott joined us for chat about the latest music coming out on Evolution Records, the current momentum in the UK Hardcore scene and some memories from throughout his career, including his first pilgrimage to the Netherlands, his one unfulfilled musical ambition and a whole lot more!

– Hi Scott, thanks for joining us for an interview today! Last year was a huge year for UK Hardcore; do you have any particular highlights you’d like to share?
I think the biggest thing I took from last year was the enthusiasm and level of production from producers old and new. In turn, this generated a lot of interest from new ravers and promoters. On a personal level, it was probably the most productive year I have had in over a decade so I’m really happy about that.

– Taking a look back a little further into the past now, you were forging your career as a DJ and producer in the earlier days of Hardcore. Can you tell us about how you first got involved with the Hardcore music scene?
I started out in 1991 writing music with a few mates under the name Q-Tex. We met at uni and spent our student loans on synths and samplers. I was always into Techno/Acid then Rave and had a huge record collection but never had any interest in becoming a DJ. As time went on and the music progressed, I somewhat just fell into the Hardcore scene which was massive in Scotland in the early/mid 90s. I was becoming more known for my individual productions by around ‘93 and promoters assumed I was a DJ so kept asking me if I could play sets. One thing led to another and I started to play at events all over.

– Over the course of your career you’ve been equally at home in both the UK and Dutch music scenes, one of only a few UK artists to achieve this. How did you find your way, musically speaking, from Scotland over to The Netherlands?
I loved the sound coming out of Holland and was desperate to make music like this and hopefully get it released on one of the Dutch labels. I went on a pilgrimage back in ‘93 to seek out some labels and hopefully have meetings with label owners. I took the bus from Glasgow to Amsterdam (via the Hovercraft crossing at Dover/Calais) – it took 24 hours and I was shattered, it was all I could afford at the time! I was armed only with the addresses found on the back of my favourite 12” records, no phone, no contacts, nothing. I literally just rolled up to places like Mokum, Combined Forces and Mid-Town with some DAT tapes of my music. Incredibly, some of my UK released tracks had made it across the water and the guys I spoke to knew who I was. That was the start of a great relationship with the Dutch, well over 20 years now.

– Of course when you play in The Netherlands you typically play Gabber / Hardcore, but do you think there might be a place for the UK Hardcore sound at Dutch events in the future?
I would love to say yes, but I really can’t see it. The biggest chance of hearing UK Hardcore in Holland is probably by listening to one of the many Hardstyle versions that have been produced recently.

– Can you tell us about your studio set up and your favourite pieces of music production technology?
I still have a huge collection of synths and devices that I’ve amassed over the years. I only sold the more obsolete items. Although my music is 90% computer based, I still turn to some classics such as the Roland TR909, TR808, Jupiter 6, JP8080 & JUNO2 for some real ‘hands on’ fun.

– Your label Evolution Records, along with its offshoots such as Twisted Vinyl, has released new material, much of which you have produced or co-produced yourself, very regularly now for well over 20 years – what is your secret to being able to keep up the momentum?
I don’t know to be honest. I go through periods of being utterly prolific in the studio, then I can go for months doing nothing but playing the Xbox and being lazy. My music taste is pretty varied so I find influences in even the most bizarre pieces of music. Add to that the fact that I love what I do, I guess there will always be momentum.

– You’ve recently worked with Japanese artist M-Project on a number of tracks, including “Crash The Party”, “Don’t Leave Me Alone” and the recent M-Project remix of “Enlightened”, how did you guys start working together? Do you have more tracks in the works?
I’ve known “M-Project San” since the late 90’s and we spoke about doing something together over the past few years. I guess it was only a matter of time before we worked together. I actually just released an album in Japan through him which contains some new tracks we’ve been working on, these will be released on Evolution this year.

– What’s coming up next this year for Evolution Records, any new artists or new releases that you can tell us about?
Last year was great because I managed to get Hotchkiss and Davidson onto the label. Both have been making great music and have more to come. Hotchkiss is the son of my best friend so that has really worked out well. I’ve been working with the vocalist Ceci on a few things recently, “I Go Crazy” and the brand new “Stay With Me”. She’s got a beautiful voice and I definitely want to make more tracks with her. I also have some other plans but can’t say too much just yet 😉

– Looking at the UK Hardcore scene overall, which artists are capturing your attention at the moment and what are your predictions for the scene over the next year?
There’s so much good stuff going around at the moment and my inbox is literally filling up with great music every single week. I’m listening to some Macks Wolf, Callum Higby, Nuton, Technikore and JTS demos as I write this. Olly P, Eufeion, Thumpa, A.B, Jonny El, Jakka-B, Fallon and D-Lyte have all been sending me great new stuff too – the level of production and enthusiasm overall is very exciting. With the recent buy-out of HTID and Ravers Reunited planning some huge events, I have a lot of hope for a good year in the UK.

– Of the many, many DJ sets that you’ve ever played we couldn’t ask you to pick just one favourite – can you tell us about three stand out gigs that you’ve played during your career?
Rezerection Event 3 (Edinburgh ‘95) – Just incredible. Walking down the catwalk to the stage was one of the best experiences of my life. Ten thousand people roaring and screaming my name… Just wow!

Nightmare in Rotterdam (Energiehal ‘94) – Not many people can boast that they’ve played there and I’ve been lucky enough to perform there a number of times. Another great experience in my life.

World Party (Sydney ‘95) – One of my first trips to Australia. Amazing outdoor event. The whole night there had been complaints about the music being too quiet. I was on at 6AM or something and suddenly the music was bumped up in volume. It was an hour of madness I’ll never forget as the sun came up. 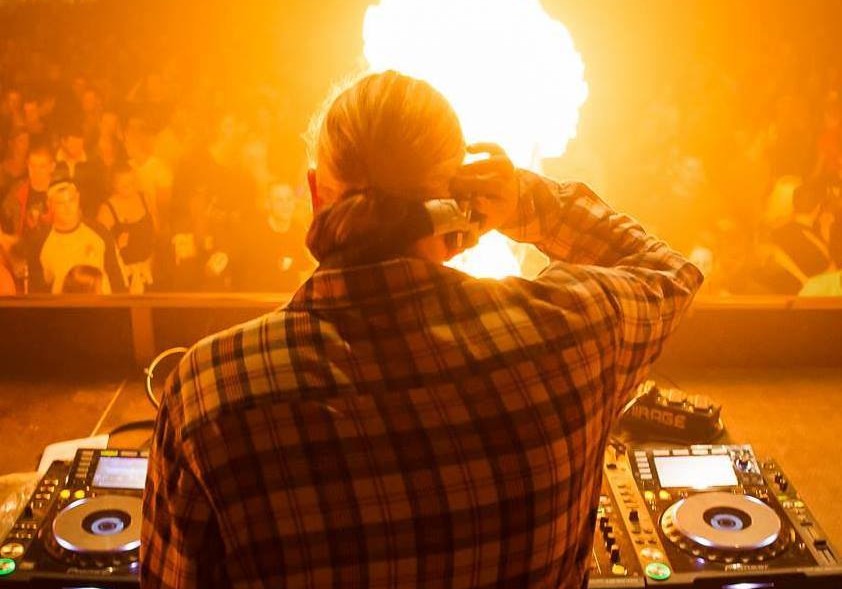 – After years of producing music and performing around the world, does the magic of it all ever get old?
I still get anxious before every set. I’ve always said if I lose that feeling, it’s time to give up. I couldn’t think of a better job.

– Having been at the top of the game for so long and certainly appearing to still love every minute of it, do you still have any musical ambitions not yet fulfilled?
You know, I never got to go on the UK TV show ‘Top Of The Pops’ and it still pisses me off! I was on standby to go on once but it didn’t happen. The programme is gone now so I guess that’ll never happen… 🙁 Other than that, I’m still constantly learning new tricks and trying to push my music to places that I wouldn’t have expected of myself.

– Where is your favourite place that you’ve visited in the world, either as a DJ or for a holiday? Is there anywhere you haven’t visited yet that you’d still like to get to?
So many great destinations for various reasons. If I could get a regular booking in Bangkok, I’d be the happiest man alive. Australia is always special for me. I generally take time out, head to Cairns and dive the Great Barrier Reef between hard weekends.

– Where is the most unusual place that you have ever played a DJ set?
So many, but one of the most peculiar was at the base of a prominent bike gang in the UK. This was back in the early 90s. The set up was fairly decent to be fair, but the funniest thing was watching the bikers get involved on the dance floor when their “highs” had kicked in. Imagine playing to Sons of Anarchy after they’ve had pills. Surreal!

– We know you enjoy a beer or two, but do you also still drink Buckfast (the alcoholic beverage that inspired your 2001 EP “The Buckfast Experience” on Neophyte Records)?
Haha yes of course! My last tipple was during New Year’s. I always have an emergency bottle in the fridge.

– And finally, the most important question of the day, what did you have for breakfast this morning?I made a three egg omelette with bacon, peppers & red onion, topped with cheese and herbs. I like to cook!

Scott Brown, thank you once again for chatting with Alive At Night today, we wish you all the best for 2017 and beyond!