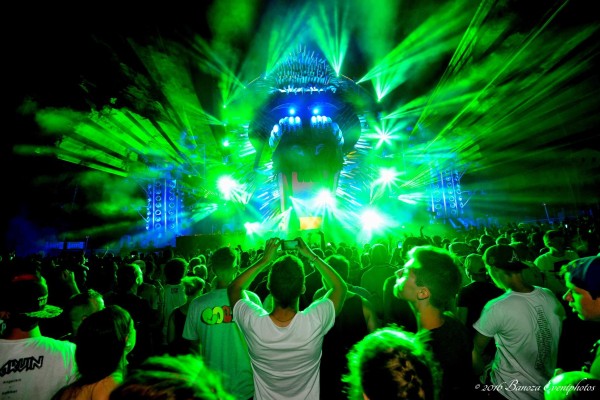 Sara’s third day at Electric Love Festival in Austria marks the second day of the Q-Dance stage at the Festival. It was also the last and most loose day of this eclectic event and in true Alive At Night style, things escalated to a whole new level of turnt!

It was the second day of waking up with a steaming hangover and tomorrow would be the third. You can’t say I’m not celebrating my graduation like a fucking champ. Waking up at approximately 10AM, I was even more hungover than the day before and I prayed to the Gods of hygiene that I wouldn’t had to wait another one and a half hours for my well-needed shower. But the line was just around a 20 minute wait, so I spent another twenty minutes in what felt like a one square metre heaven of warm water. After the girls got ice cubes to cool our drinks we tried to drink up as much as we could, since we didn’t want to carry all our cans back home. While I helped with mainly the Wine (yay for White Wine Spritzer) the cans just didn’t want to vanish. Drinking up I looked at my arm and I was pretty sure I had a sunburn (spoiler: writing this, my skin is peeling off on one upper arm) from yesterday’s sun. I got myself a snack from my tent (surprisingly tasty organic vegan snack sausages), applied my make-up (for the lack of water I applied my wet-use eye-shadow with wine) and made my way dow the infamous hill for one last hoorah! 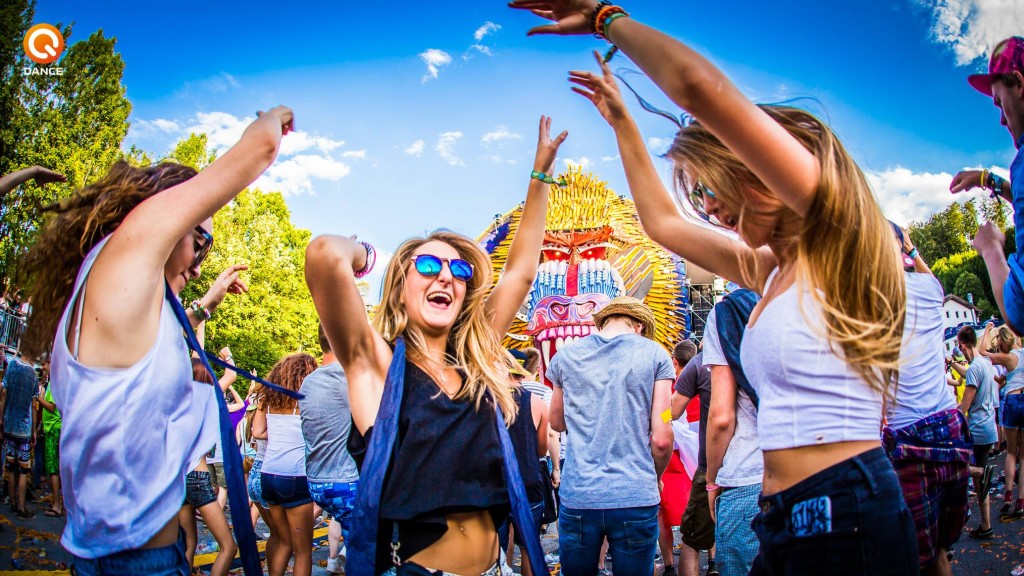 At around 14:40 I arrive at the Q-Dance stage where contest winner Phandelic was playing. Being a true newcomer in the scene, I basically just knew him and his music from Soundcloud and curious to say the least. The set was quite alright and the first die-hards were already gathering. A surprisingly motivated crowd awaited me during Scale, who played an extremely powerful set with lots of edits. Stickers were handed out and I enjoyed the fact that Austria slowly respected and loved its own local heroes. During both of these sets I was mainly chilling on the “Chill Hill” next to the stage, as my hangover level was still scoring a solid 11/10. After recharging I chatted with Daniel from Musical Madness and the legendary Photographer Gerard Henniger. “SAMBUCA???” – “Uh.” Well this is how the Slo-Mo video on our Alive At Night Facebook happened.

Just a few steps away I spotted Phandlic and decided to interview him before I was forced to drink even more Sambuca. “So… You won the contest! How was the set?” – “I was quite nervous but, it was quite amazing!” – “How was the crowd?” – “Tired and not a lot of people, but still really good!” He was still visibly hyped up about what happened just a few hours ago. I decided to chill with Daniel at the Backstage for a bit. Suddenly a huuuuge group of people was gathering in front of us. The Electric Love Embassadors! Their hard work was being rewarded with a backstage tour and chatting with one of the guys, they were really hyped up and thankful about this chance to take a look behind the scenes. I think if I wouldn’t have been working as journalist, I would have loved to be an Embassador too! 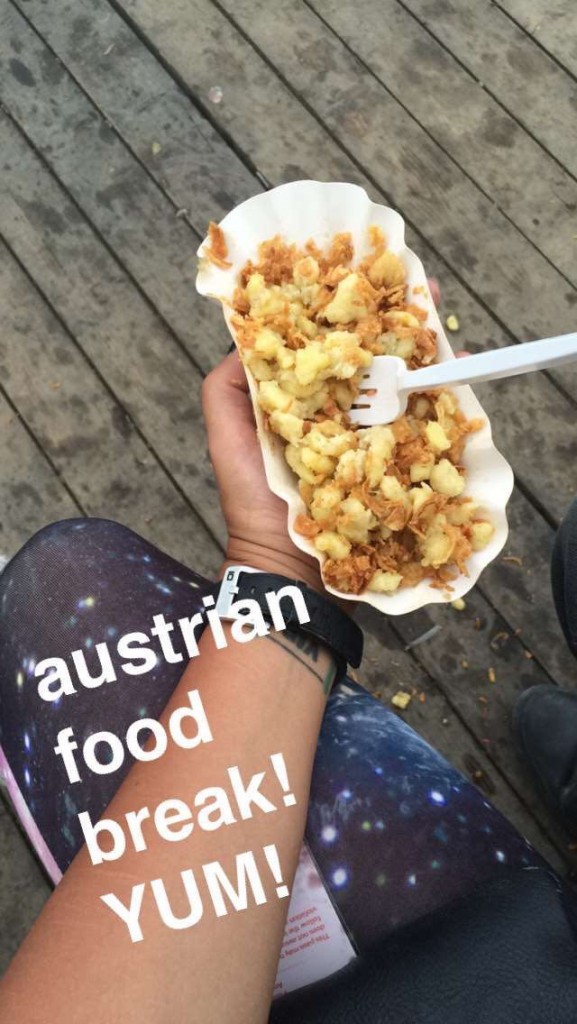 During Max Enforcer Daniel and I enjoyed the music from a distance as we started to get hungry. After running into Scale again, we decided to get some food. And ohhhh boy, the catering was the exact opposite of the shower situation from yesterday. Asian, Indian, Dutch, Austrian, gluten-free, vegan, vegetarian, cold, hot, spicy, sweet – NO festival I’ve been to in the Netherlands could keep up with the catering at Electric Love here in Austria. Daniel and me decided to have some Austrian food. Today’s choice of Käsespätzle topped my garlic-sauce-soaked Lángos from yesterday. It was godlike. After our very personal epic meal time, we decided to get a Mojito. I love Mojitos, but this one was so sweet that I could feel cavities forming everywhere on my teeth. We watered it down several times in order to be able to drink it. Max Enforcer’s set was in full effect now, everyone was having a visibly good time and the sun was shining hot as hell one again. 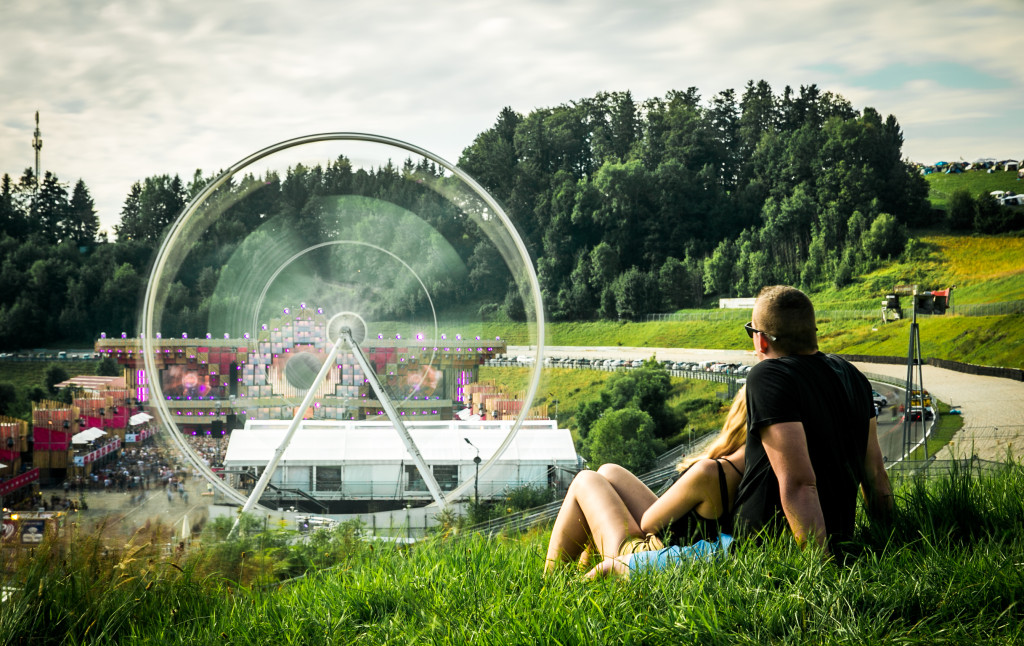 After watching a bit of Wasted Penguinz we decided to check out MOTi and GTA at the mainstage. We were at the very back of the crowd, giving us enough space to dance and sit around. Whilst us chicks were busting out some sick moves, Daniel was checking out some other girls when he noticed something. “Uh. Sara, look.” He was dying of laughter. “Oh. My. God.” One of the girls had her tampon string hanging out. I was torn in between feeling sorry for her and not being able to breathe because I was laughing so hard. Barely able to talk or walk straight because of laughter, Daniel brought up the courage to tell the chick about her wardrobe mishap. She looked absolutely mortified and quickly escaped towards the toilets. Sorry, girl, but you were the funniest! I hope you still had a great day and I hope your period and us didn’t completely ruin your festival experience! Walking back through the tunnel to catch NCBM Live, we didn’t just hear the obligatory “Heeey-Hooo”, but also the Icelandic Soccer chant (“HU! …HU!”), which was happily adapted by partygoers. 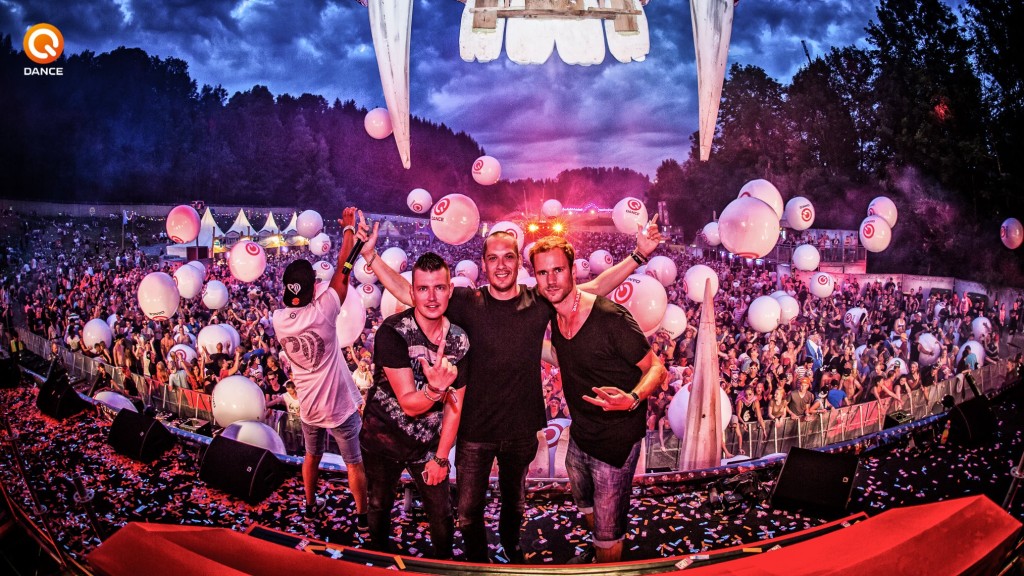 NCBM Live were absolutely sickening (in the best possible way). While the combination struck me as odd during its announcement, I must say that I am an absolute fan now. The energy during the set was absolutely mental (more inflatable huge Q-Dance beach balls, anyone?) and all the new music got me hyped up for what was coming up for this great mega-act. I had to get a drink from backstage again, as I had spent all my money on cocktails and food. After a short chat with the Musical Madness crew, and greeting the artists that had just arrived, I headed for the bar. The bar chick gave me a cup that was 10% orange juice and 90% vodka (ice cubes excluded in this calculation). “Guuuuurl..!! You tryna’ kill meee!??” – “You’re a big girl. Deal with it.” Needless to say that I somehow “dealt with it” but was pretty damn wasted after. Thanks, girl. This is where things slowly started to escalate a “little bit”. 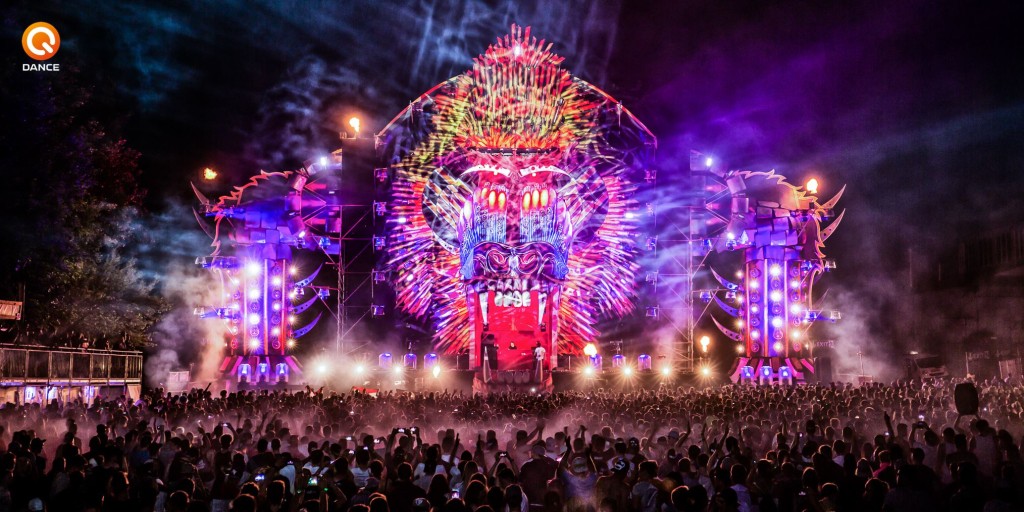 Running to the middle of the dance floor with one of the German girls, I found my camping squad again during Wildstylez and I was happy to see that by now all of them were as wasted as I was. We caught up with what had been happening the past hours as Wildstylez kicked out a very summerish set. The backstage bar girl’s killer mix was slowly kicking in and I caught myself singing along to ‘Earth Meets Water’ from the top of my lungs, hugging my friends and dancing. I picked up glow sticks from the floor and started glowsticking until I saw that some people had Desperados Light-Up Rings. I got one buying a Desperados with my last cash (yay more alcohol!) and then traded my soap bubbles for another ring. I probably looked like a complete idiot, but that was okay. Then I moved to the front left again, where my German squad was now dancing. Running back and forth from the back middle, front left to wherever permanently, I had to sit down for a second. 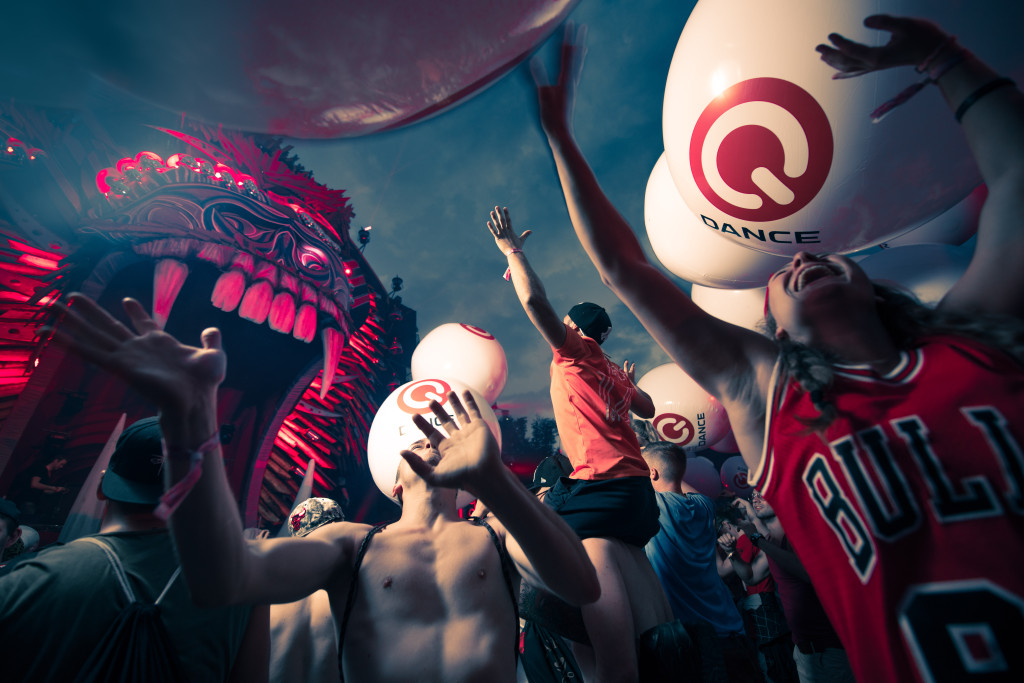 My head was spinning a bit during Atmozfears. But not enough to miss his epic set. I also ran into the Concept Art guys again, who probably also had the one or other drink. By now the atmosphere (haha, get it?) was pretty loose and all of us were dancing along doing DJ moves, “hand pianos”, shuffle dancing and even Jumpstyle dancing. By now everyone who didn’t have to drive a car home or to a hotel was (at least) tipsy. I got myself another drink and had a chat with one of the backstage securities. Drunk me once again felt the maternal instincts coming up and teaming up with the backstage bar girl (I was still scared of her) I decided to get Red Bull for all of them. Hey, someone had to! As Psyko Punkz started to play the Germans and me dragged Atmozfears and his entourage out of the backstage to dance. Yup. Drunk shit. “You wanna say something?”-“I AM A STORM TRAIN GENERAL.”, Tim said being absolutely convinced that his broken German made any kind of sense. It didn’t. All of us danced around, living our best lives in the warm alpine night and Mr Psyko was kicking out just the right tracks. We were, quite undeniably, the motherfuckin’ Drunken Masters (of whatever) and I was now at a point are my voice recordings barely made any sense anymore. 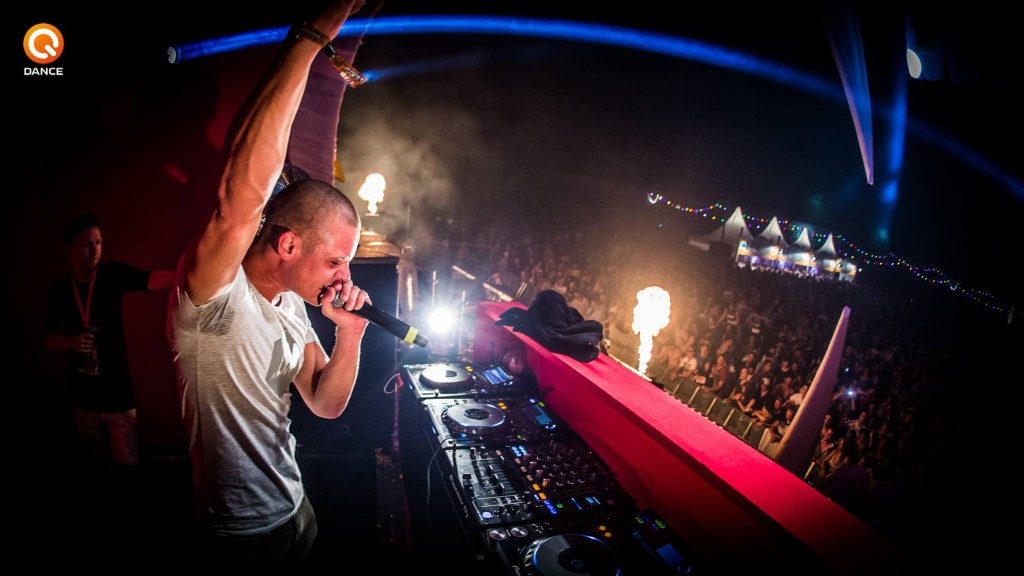 I just remember saying goodbye to Atmozfears after a killer Evil Activities set and then heading off to the main stage. Q-Dance took over the main stage as Hardwell was not able to make his flight despite Revolution Event trying literally anything they could to make it happen. And what a takeover it was! I wouldn’t mind a Hardstyle closing takeover like that every year! Then, still pretty wasted, I somehow ended up at the toilet close to the Club Circus asking myself how the fuck I will make it to my tent. After sobering out a bit at the set of Chris Liebing (holy crap, what an after hour!), thankfully my German friends needed a cab home to their hotel and Camping North was the way to go. We miraculously made it up the hill without dying and I we said our goodbyes at the Taxis at around 4AM. On my way to my tent I drunkenly decided it was a good idea to interview the paramedics of Camping North. They told me they had cared for over 100 broken or otherwise damaged ankles and probably used more than 1km of band aid, next to caring for a lot (“Phew… 500? More than 1000?”) of wasted people. I decided it was time to take care of myself and get my sorry drunken ass in my tent. I couldn’t properly eat and left my food outside while I got into my inside-out sleeping bag. 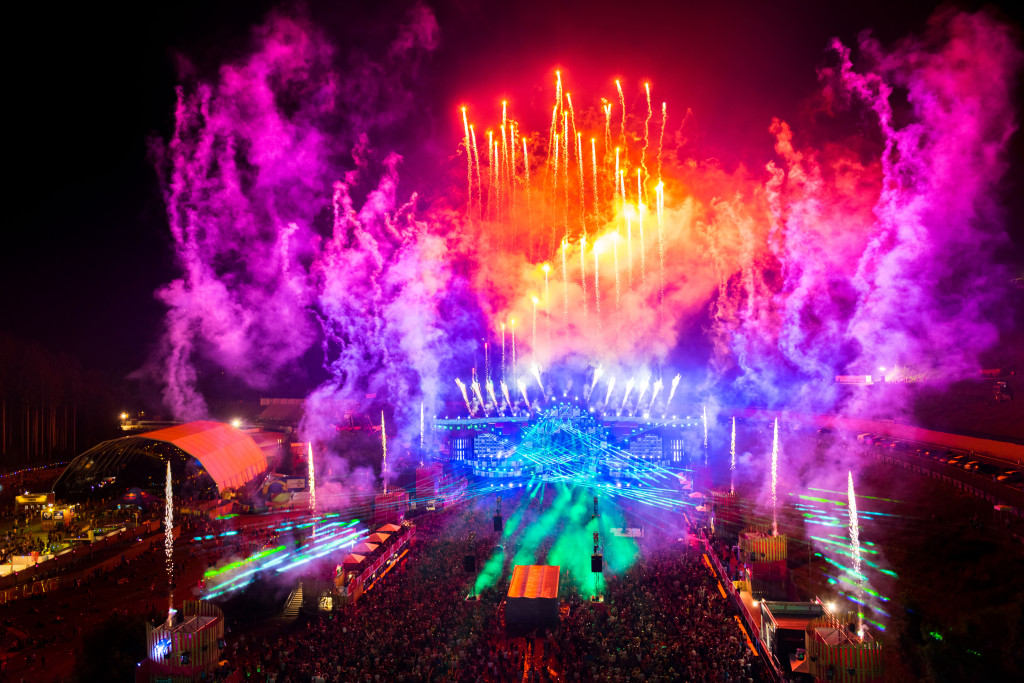 The next day my hangover was so bad that I almost threw up first thing in the morning. At least I was awake. We took quite our time with checking and almost missed getting our “trash tax” back. I almost threw up twice while trying to pack my stuff up. We still scavenged and salvaged useful stuff from the camping grounds until we got our shit in the car. Tired, but happy, we left the camping grounds and therefore Electric Love Festival. What. A. Fucking. Weekend.

Conclusion:
Holy shit. Revolution Event and Q-Dance manage to top their own game year by year! And let’s not forget b2s and the legendary premiere of the Pussy Lounge! Electric Love hasn’t just quickly become the most important electronic music festival of Austria, but also the most important annual gathering for the alpine lovers of the harder styles. While the camping could use some improvements here and there, the actual festival was A1+ (with minor hiccups at the main). Considering this had the consequence of a Hardstyle closing, there was nothing a Hardstyle lover could have missed. We share the love for Electric Love and hope to see you next year!

Pictures: Revolution Event / We Are The Night / Writer’s Own / Q-Dance

Make sure to check out the German version of this article too at Hardstyle Österreich:
(link follows 13-07)