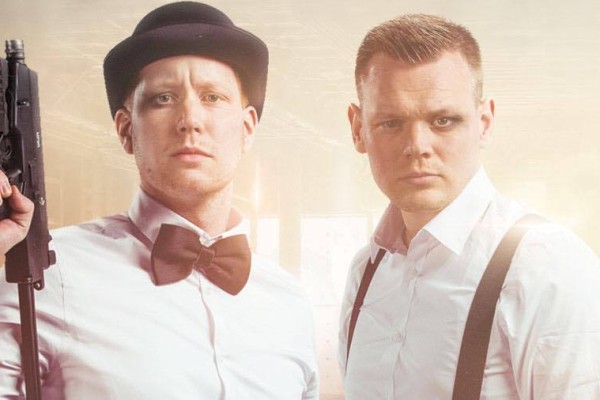 Theracords artists are always easy to identify: their mixing is exciting, they make high quality music, and when they’re on stage they party just as hard as the fans do. Degos and Re-Done are no exception to this, thanks to their love and passion for the harder styles. Launching the act in 2008, these producers have mastered the art of combining punchy kicks, melodies and energy in their releases. With tracks like “Evolve,” “Connected,” “Madness,” “Sing For The Moment” and “This Mind,” it’s easy to see why these guys are the hot favourites from the Theracords label.
Degos and Re-Done have just finished up their Australian tour which ran through February 2016, so Alive At Night jumped at the opportunity to get to know them better.

– Hi guys! Welcome to Australia and thank you for taking the time to catch up with us. For those who don’t know you, please introduce yourselves.
Hi Alive At Night! We’re Degos & Re-Done, an act that consists of three people! Many of you might not know this, but two of us (Krijn and Peter) actually do the producing and two (Peter and Thijs) who do all the gigs. Together, we’ve been producing music and performing since 2008!

– Tell us about your recent gigs in Sydney and Melbourne. Was this your first time down under?
This was our first time down under so we didn’t know what we could expect. We’d heard a lot of great stories from our fellow colleagues, so we were pretty hyped! When we arrived everyone was so friendly and we immediately felt at home. The gigs were also awesome! The fans in Australia are mental and they really go nuts at their parties! All of them are real die-hards! A huge highlight for us was the gig in Sydney which was sold-out, so the crowd was just massive!

**Some footage from the Theracords Australian tour**

– Now let’s take a trip backwards. You guys have been releasing music for many years now, but how did it all begin?
Well, Krijn and Peter have known each other for a long time now and have been producing music for years. The first tracks were picked up by Norman and Trilok & Chiren, which were released at Mythica. This led us to some DJ bookings but Krijn (Degos) didn’t want to play on stage, so we needed a face and in came Thijs! He supported our tracks in the early stage such as “Rawness” and “Synthgeweld” and he also lived nearby which was quite convenient.

At that time, Thijs didn’t have a lot experience with DJing and had only been mixing for around 3 months; however he won a lot of contests and was really dedicated to it. All in all, that’s how Degos & Re-done where born. After a while, the Mythica label closed down which left us searching for a new label to fit with our sound. That’s when we came in contact with Pieter (Thera) who was very fond of our unique sound. Soon after that, we joined Theracords, released a shitload of songs and been doing it ever since!

– Who or what inspires you guys to continue making music?
That’s a good question! We think you can get inspiration from everything in life. However in terms of hardstyle music, we’re really inspired by the works of Ran-D, Endymion, B-Front, Adaro, Frequencez, and Phuture Noize.

– As a trio, what are some of the challenges you have in the studio? And do you ever have arguments?
Hmmm… not really, but we do have some pretty tense discussions whilst in the studio! All three of us have different opinions sometimes, but we think it’s normal. We are all quite down to earth and are always in for a challenge!

– You’ve been headlining events throughout Europe including all of the biggest festivals on the calendar. What has been your biggest career highlight so far?
Knock-Out in the Ahoy in Rotterdam where we played ‘against’ DJ Thera. What a moment that was! Simply legendary. We’re still on our knees thanking b2s for this one….

– Sometimes that can be a hard question, so tell us about your most memorable gig too:
Q-BASE 2013 when we played in The Hangar was incredible! We were pretty pissed off just before our set for some reason; and we’re not the type of guys who can flip a switch and be happy! So, we were sitting behind the decks, being announced by MC Ruffian and we were like: “fuck, we can’t go on with angry faces!” When Ruffian announced us, we came up, hit play and the whole area absolutely exploded! Our track “Connected” hit the Hangar like a bomb and the rest is history!

– Many artists are releasing albums at the moment, have you guys thought about doing one?
We’ve thought about it but we decided that we need to do it at the right moment. Right now we’ve got plenty of tracks ready and there are many more currently in the making!

– You’ve collaborated with Warface and B-Front in the past. If you could choose anyone in the world, who would you collaborate with next and why?
This is a hard one….. But…. Noisecontrollers! His music is pure epicness and has such a unique style and top-notch quality.

– We hope you had fun in Australia, did you eat any of the native animals like kangaroo or wallaby?
No, but we did drink German beer! Germans rule the beer-scene! Hophaus Melbourne for the win!!

– And if we came to your houses for dinner, what would you make us?
Maccas! Hehehe. Peter is awesome with Hamburgers, so this question was easy!

– European summer is coming, so where can we see you play next?
Some great gigs are confirmed for us and there’s also something special coming your way! Keep an eye out for it, we can assure that it will be huge.

Degos and Re-Done, thank you so much for talking with us today. We look forward to hearing more music from you in the future, and we hope to see you back here in Australia very soon! For those who would like to see what the guys are up to, follow them via their social media links below.