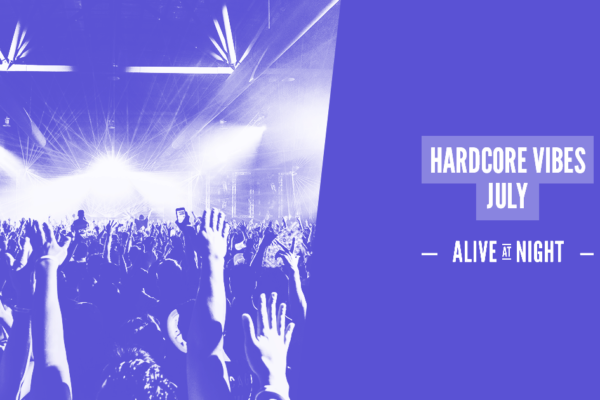 How did we get here already? In seemingly no time at all we’ve reached the month of July, over half way through the year. I hope your July is a happy whirlwind of summer holidays, summer festivals and summer raves – with a soundtrack of all the best new UK Hardcore music of course!

FutureWorld boys Macks Wolf and Jakka-B have scored a perfect summer hit with “Islands In the Sky”, which is actually their first collaboration. It’s always exciting to listen to a track like this where both artist’s influences are so clearly present throughout the track – a meeting of two great musical minds has taken place and “Islands In The Sky” is the result.

Also just dropped on FutureWorld this week and deserving of a bit of a fanfare is the “You & I” EP by Kizum. The title track “You & I” is a big peak time vocal track, “I’m Gonna Fly” has a very Euphoric Hardstyle feel going on, while “Blow Up” dives into the to the new school bass sounds. This EP demonstrates that Kizum has his finger on the pulse of the scene, all that remains to be seen is which direction he will choose to focus on as his own style develops.

Scott Brown’s instantly recognisable classic “Neckbreaker” has been given a nice little reboot in the current euphoric style by M-Project and Mitomoro. With a melody that will be familiar to virtually everyone on the dancefloor, this remix is sure to slide perfectly into any upfront UK Hardcore set.

Speaking of Scott Brown, his set with Outforce and MC Enemy was a definite highlight of the recent Ravers Reunited – Sounds Of Utopia party on the first weekend of July. The night featured a string of notable performances including Stonebank with MC Keyes, who is not only one of the UK’s leading MCs but is also a co-creator of the Ravers Reunited events.

Coming up literally right around the corner is Summer Gathering Festival at Donington Park Forest, where Ravers Reunited will be hosting an incredibly stacked UK Hardcore line up on Saturday 29th and Sunday 30th July, alongside stages of Drum ‘n’ Bass, Jungle and numerous other hard and fast styles from co-promoters including a stage by Fantazia to celebrate the 25th anniversary of one of the most legendary events in UK rave history, Fantazia – One Step Beyond, which took place at a nearby location all the way back in the hectic raving summer of 1992.

Not only does the music pump out loud for 12 hours during the daytime at Summer Gathering but there will also be several extra hours every night as stages will reopen after 11pm as silent discos – so no one has to go to bed until they’re really and truly all partied out!

The Friday night campers pre-party is looking very nice too and features a nice UK Hardcore line up presented by Bring Back The Rave and Natural Born Ravers, with artists including among many others our good friend Eufeion. Consistently one of the busiest producers around, Eufeion is on a roll and shows no sign of slowing down, with his latest solo release “Break You Down” bringing some uplifting summer vibes to the dancefloor.

Cheeky Lethal Theory lad Spyro has his first official label release out this month. With its tough bassline and aggressive vocal hook, “Diamond Mouth” is a powerful debut – as Spyro himself would say, check it out you wrong’uns!

“We will forever be faded under gold skies…” I’ve got to say, I’ve heard the Darren Styles & Dougal remix of “Gold Skies” so very many times in DJ sets that I completely didn’t realise that it remained unreleased until just a few days ago. Upon a first listening of the full length track the intro may seem unfamiliar but rest assured that all will become clear when the vocal slides in just before the drop.

HTID Genesis has just been announced for Sat 23rd September at the O2 Academy in Bournemouth, on the south coast of England. This will be the first HTID event in the UK under the management of HSU Events, and with the south coast being home to a large population of UK Hardcore ravers it’s a great choice of location for HTID’s homecoming.

Amongst a line up of many long-time favourite names in the scene it’s a delight to see Callum Higby’s name on the bill for HTID Genesis, although this should come as no surprise to those who witnessed his incredible set at HTID In The Sun. A standout track in Callum’s recent sets has been his absolutely stunning remix of Bonnie X Clyde “Bass Jam” and it’s worth noting that this is one of several high profile 160bpm tracks to feature on the scene of late. The idea of ‘our’ music taking its foot off the gas and venturing back into the realms of lower bpms seems a little scary at first, but I think the more I’m hearing of it, the more I like it.

So is 160bpm the new way forward for UK Hardcore? Is this a trend that could go the distance or just a spicy summer fling? Don’t be shy, share your thoughts in the comments!