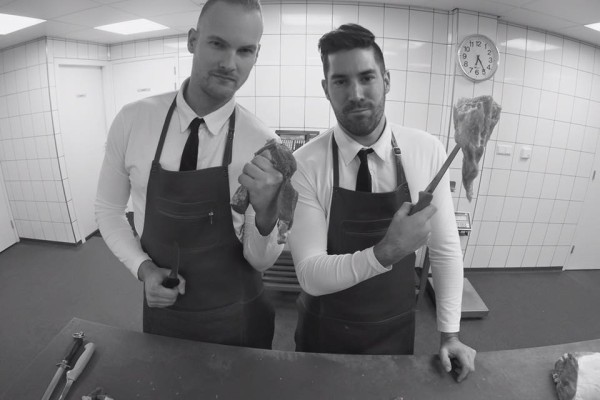 Energetic, exciting, dynamic and dedicated – that’s how we like to sum up one of the scene’s most powerful duos, Frequencerz. Niels Koster and Pepijn Hol have voyaged through the various phases of hardstyle for 10 years and despite the demise of other duos in recent years, Frequencerz remain stronger than ever! The pair has developed a massive global following that have supported them at events such as Hard Bass, Defqon, Thrillogy and most recently the most prestigious of them all, Qlimax 2015. With next-level releases and collaborations in their discography such as “Revolution,” “Bitch,” “Rockstar,” “Fatality” and “Psycho” alongside B-Front and of course, “Wolfpack” with Tartaros and MC Jeff, they have truly made their mark on the scene and are showing no signs of slowing down.

When the big news about their forthcoming album “Medium Rare” dropped early this year, we were absolutely delighted and now that the release date is set (30th March) and previews are sizzling (like a medium-rare steak) on the net, we decided to pull this power-duo aside for a chat!

– First of all, thank you for chatting to Alive At Night. Can you guys give us a recap of your 2015?
2015 was a good year for us; we had lots of gigs and we have noticed that our dedicated fan-base just kept expanding! Apart from the big events and precious moments, 2015 mostly provided us with insight into what exactly ‘Frequencerz’ stands for.

Over the years we have developed our own signature sound, which we feel good about and next to that, we’ve also noticed what Frequencerz stands for as an act. We have so much fun on stage and this is something we want to bring over to our audience. Of course we are raw hardstyle artists, however we try to keep our sound accessible and uplifting for our listeners with a balance between raw screeches and pounding kicks combined with uplifting melodies and catchy vocals!

We’ve said this many times before, but we’ll say it again: when we play, we bring the party!

– There are not many duos in the hardstyle scene left, especially ones who’ve been together for 10 years and are still releasing music today! How does it feel to be one of the remaining duos left?
10 years is a long time and a lot can happen. Artists develop over the years; some grow apart from each other and others grow together stronger. Over the years we have learned more and more regarding what our individual strengths are and the combination of those strengths are what makes Frequencerz. We feel confident in the way we work and we believe that our fans support us based on what we both deliver to the act.

– What is the secret to your successful relationship in the studio?
We never force the creative process. Everything that has been released so far is based on spontaneous creative inspiration. Both of us come up with creative ideas and the success lays in the fact that the other will support and strengthen it. We ‘play’ like a team; one gives the support and the other will score and so forth.

– You’ve collaborated with several artists over your career. Which artists have been most influential to you and why?
It’s always influential when you work with another artist, because everyone has their own way of working. It sounds cheesy, but it’s always eye-opening. Of course there are some artists that you prefer working with, since they have a similar way of producing, however on the other hand, working with artists that have a totally difference approach can lead to a much more interesting track.

– You’ve had a strong association with B-Front over the years. Tell us more about how the concept of B-Freqz came to exist and what it’s like to be in the studio with Bob.
Well we’ve been close friends with Bob for years already and that’s what makes working together a lot easier. Together, our sounds comprise a great combination and that’s why we started B-Freqz. It began as a one-time performance at Hard Bass, however we decided to continue with this cool act. With that said, we also worked a little bit more on improving our solo careers.

Being in the studio with Bob is like having a beer together; as we said before, we are great friends and we love hanging out with him. We feel as though when you’re having fun in the studio it’s possible that the work is done quicker as opposed to being serious all the time.

– Another recent collaboration of yours is with Da Tweekaz! How did you guys decide to work together and how’s it going so far?
The album gave us the opportunity to experiment in the studio, so we wanted to do a collab that wasn’t too obvious to our sound. The first artists that came to our mind were Da Tweekaz and it actually makes a lot of sense – Da Tweekaz are like the ‘Frequencerz’ of euphoric hardstyle! They are a duo, party-minded, have a no-nonsense attitude and just like us, they love working with melodies and vocals. It was really fun working with the guys, they’re also very genuine!

“Full Control” is now finished and available as a preview online, be sure to check it out!

– You continue to headline more and more events each year. What has been the biggest highlight of your career?
Without a doubt: Qlimax. This was an unforgettable experience and it felt like a crown on our work. We enjoyed every second of this set.

– Can you share a special memory that either of you will never forget?
Niels: There’s so many amazing moments that I’ll never forget, but if I have to choose one then I’d say the moment we began our set at Qlimax.
Pepijn: Our Qlimax opening for sure! When we began our set with the Qlimax edit of “Wolfpack” I’ve never had that many goosebumps… It was incredible! 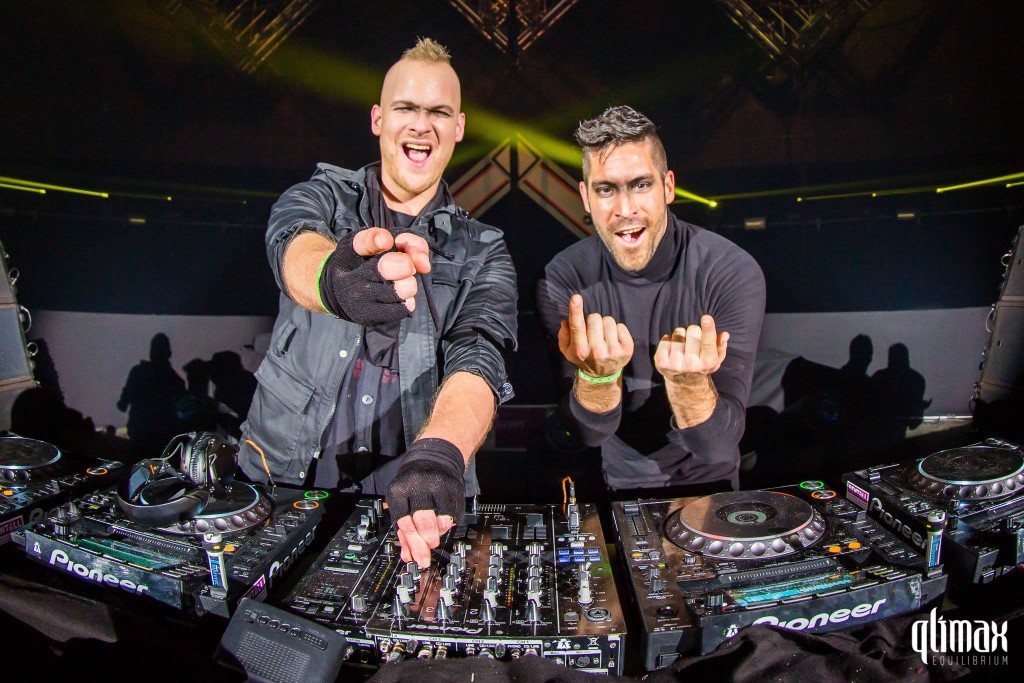 – Since 2005, you’ve developed your own sound and produced so many memorable tracks that have had a huge impact in the hardstyle scene. What kind of releases will we hear on your upcoming album ‘Medium Rare?’
The general key to the material on the album is the right combination between uplifting melodies and raw sounds. Of course some tracks lean more towards euphoric whereas others will lean more towards raw. We can say that every track has its own unique flavour and they also represent the ‘future’ Frequencerz signature sound – MEDIUM RARE!

– A lot of your tracks feature some brutal samples which create a real ‘bad-ass’ vibe to them. Are you guys secretly gangsters?
Everyone that’s involved in the hardstyle scene secretly is a gangster in our opinion ;). The reason why we often use ‘bad-ass’ vocals is probably because this always gives a tougher vibe to the track. We like to mix this up with a nice melody to balance it out.

– Producing an album can be frustrating and difficult. What has been your biggest challenge so far?
The final deadline is always challenging, however we’re happy that we were able to deliver more tracks than we had originally planned. So the deadline was a bit stressful, but it didn’t influence the album in a bad way.

– You guys have adapted to the changing sounds in the hardstyle scene. In your opinion, what direction do you want hardstyle to take from 2016 onwards?
Over the last few years a big divide occurred which caused a large gap between euphoric and raw hardstyle. We believe that this was mainly because the raw sounds became more and more extreme than they already were. We are basically still as raw as we have always been, however this shift of ‘raw’ in the last years has put us more towards the middle. This doesn’t make us 100% raw nowadays; therefore we prefer to name it #MEDIUMRARE.

– Just a quick question about your recent release “Wolfpack” with Tataros. What’s the inspiration behind the track and did you guys anticipate that it’d be so successful?
When we received the vocals from MC Jeff we instantly knew that this track would become a hit. The lyrics describe the situation on the dance-floor very well and it’s always fun to see the real fanatics on the front screaming the lyrics.

– Other than an album, what else are the Frequencerz going to give us this year?
A lot of cool gigs are planned for this year! Besides that, we are hosting stages at some cool festivals such as Rebirth Festival and Fantasy Island.

– The energy you give to your fans at your performances is fantastic – is there anything you would like to say to these fans?
Our fans are really the best in the world and they give us so much energy when we’re on stage! It’s always a good feeling when you see fans raising their Frequencerz flags or showing other merchandise. A huge thanks to Frequencerz Fanatics for being so dedicated!

– And of course, you guessed it! We want to know what you had for breakfast this morning!
Niels: Brinta and 2 boiled eggs.
Pepijn: Bread with Duo Penotti and cookies with milk!

– Thanks so much for chatting to us Niels and Pepijn! All the best for 2016!
Thanks for the chat guys! 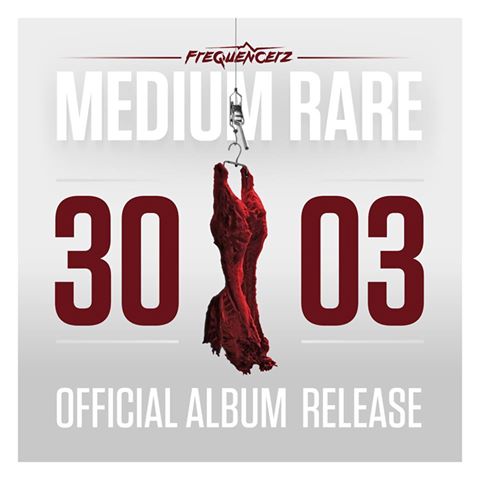 Thanks to Frequencerz for this interview; we wish the guys all the best for the release of their album “Medium Rare.” We have no doubt that it will be one for the books and we’re excited to hear the remainder of the previews! Their album will drop into the scene on the 30th of March, so be sure to grab your copy. Keep posted on their social links below for information about pre-ordering ‘Medium Rare.’


I can really imagine that the Frequencerz have a solid fanbase. Like they said, their merchandise is fantastic. I really have the idea that they do also have a marketing strategy for their merchandise. Special things like the Bracket Bracelet and limited edition caps, counting from 1-100 are special designed for the fanbase of the frequencerz merchandise. This is a new phenomon in the world of hardstyle. Merchandise becomes more and more important.