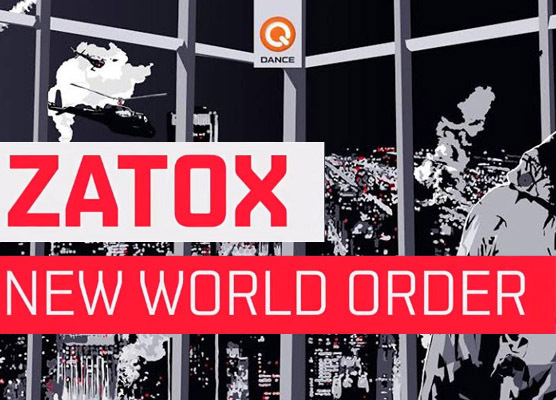 “Embrace the future of the hard sound…”
Are the golden words attached with one of the most anticipated albums of 2014, which is set to tear apart the world of hardstyle with a vicious and powerful storm.

It is no secret that in the year of 2014, the hardstyle scene has undergone some shifts and turns. From the rise of overly distorted kicks, standardised screech patterns and a producers hunt to create the ‘most brutal’ dance-floor smasher, it is evident that the scene is wedged in a temporary state of flux. Thousands of fans congregate around the hardest tracks that they can lay their ears on with no particular link to an artist’s actual production quality and creativity.

It is time for a change.

It is time for a extraordinary movement to dominate the world of hardstyle, to stir the pot of the scene and rewrite the bible of music forever… Calling all revolutionized souls to step forward and break the mundane chain of everyday music and it’s media.

It is time for a fresh and rousing insurgency…

It is time for a “New World Order…”

Gerado Roschini, better known as energetic hardstyle pioneer, Zatox, has evidently been one of the most respected artists in the hardstyle scene for over one decade. From the beginning of his musical career in 2002, Zatox has brought top-line productions that inject listeners with an immensely unmatchable energy and power that can recharge any soul.

As a producer, Zatox thrives on pure originality and versatility as he masters the craft of creating tracks that consist of the greatest musical elements. Although the scene has shifted towards the quest to find the hardest kicks and most overwhelming screech, Zatox has stayed true to his signature sound and his high quality productions that are capable of capturing all listeners.

New world order is a complete showcase of what Zatox stands for as a producer and a celebration of his huge musical success. This album is a true gift to the hardstyle scene and is sure to open some minds to the importance of quality production and how the balance between the ‘raw’ sounds and ‘melodies’ can create true musical greatness.

The anticipation builds from track 1 of the two CD album. The self titled “New World Order,” featuring the rising star Dave Revan sends the minds of listeners into overdrive. The powerful vocals in sync with the Zatox’s signature kicks truly set an eerie and thrilling atmosphere, that is surely going to tear the dance-floor to shreds.

We continue on this journey with another slammer named “Be As One” featuring the heart-melting Aussie vocalist Katt Niall who brings more of a slightly emotional vibe to this track, despite its extreme musical power.

Next up are two back to back tracks that have been teased around the dance-floor in the newly ended festival season. “Back In The Days” with Brennan Heart and “Stand My Ground” with Hard Driver feat. Dave Revan are two of the signature tracks off this album that have been taking the world by storm! They have everything that is required to kick any crowd into overdrive and I’m sure we will definitely be hearing more of the album in the coming festivities.

Following the greatness is indeed more greatness as Zatox teams up with upcoming Italian masterminds Raxtor and Kronos to create two absolute slamming tracks. Supporting the next generation of Italian hardstyle superstars, “Madness” feat. Tawar, combines the very best of Raxtor’s signature stylish sound and “Kiss My Ass” with Kronos, packs an extreme punch of power with some super Italian flavour.

Another track that particularly tickled my senses was “Back To You.” I had heard this one previously floating around on various podcasts without noticing that it was a Zatox track. This track is definitely one out-of-the-box gem that can provide any listener with some well craved “feels,” yet not surrendering to get even the toughest of critics dancing.

Track #11, “Red Alert” left me absolutely speechless and also resulted in me being distracted for a few minutes to get up out of my seat to have a quick dance. This track is the definition of raw power and can wake up the heaviest of sleepers. Note to all of you – do not play this in student housing during the hours of midnight until 7am… It’s alarm sounding presence won’t go down well with your housemates! (I learned that the hard way)

CD 1 is wrapped up in perfection with an 100% Italian classic “Satana (Zatox Remix)” by Activator & Kronos . This is one track that every hardstyle lover would have cherished for many years and probably for many, many more.

CD 2 is kicked off with a collaboration with Tatanka, featuting Max P – “Victorious Glorious.” There’s no doubt that when Zatox and Tatanka are raking in some studio hours, there is undoubtedly magic to be made. Although there are no Wild Motherfuckers to be seen on New World Order, these two solo magicians know music inside out, and once again they did not fail to electrify the dance-floor with this banger! The vibe stays high for “Hardstyle Anytime,” as Zatox brings back rising star Dave Revan for the 4th time! With Revan’s vocal versatility, it is no wonder that he features in five tracks from the album!

When I first saw that New World Order contained two CD’s, I was brushed over with a slight pessimism at the fact that CD 1 would most likely contain what the hardstyle community would call “soft” tracks and then CD 2 would crank it up and blast my ears with approximately 45 minutes of “harder” stuff. However, I was wrong (and also pleasantly surprised). Once I began listening to CD 2, I came to the immediate conclusion that Zatox is truly an inspirational artist who has conveyed his own musical vision, rather than jumping onto the bandwagon to please the ever-changing market. I feel as though Zatox wanted to stand the test of time by creating an album that can be listened to today and still appreciated in five years time.

With the perfect combination and balance of feel-good melodies and rough and raw vibes, listeners are constantly guessing what will come next. Particularly enjoying “Make Some Noise” with Activator, I came to a decision that the Italians really know their music! This was another track that had been making its way through podcasts and also managing to tear a new one in many festival crowds.

By somewhere around track 6, it is time for my personal favourite track of the album – “No Limit (Zatox Remix)” by 2Unlimited. This stylish gem undoubtedly brings back the ‘style’ to accompany the ‘hard’. Being on repeat for days on end, this track is evidently one of those slightly underrated ones from the album. So people, appreciate the ‘groove’ every once in a while, it won’t kill you! Following on from the groove is something dark and driving. Bringing in Italian heavyweights TNT, “Intensity” is one track that reminds me of being stuck in a swirling and dark storm. A tip for all gym junkies – put this baby on next time you’re trudging your way through a difficult workout or even a run through the rain and it will provide you with all the power that you need! From “Intensity” on, New World Order kicks into irreversible overdrive which only means one thing – be prepared for the madness.

“Still Here” with R3belz shows the world how “rawstyle” is done, cranking it up a little further before the album reaches its climax.
For the final two tracks, Zatox brought in the big guns and took us all to a place of no return. It wouldn’t be a 100% Italian album without bringing in Art of Fighters for one hell of a collaboration “Booty Breaker” and not to mention, teaming up with hardcore’s energetic youngster DJ Mad Dog to create “Violent”. Coming in as a close second favourite, “Violent” is one final storm to turn us upside down and transform any innocent soul to one of aggression.

Just a word of warning, this album is not for the faint hearted, or the closed minded. So if you want to get through those tough weights sessions, long runs, late night parties or even traffic stricken drives home, then I highly recommend getting your hands on this album!
Open your mind, unleash your senses and join the new world order…

New World Order is available on iTunes, Spotify and Hardstyle.com