“I want to make the dance-floor into a war zone!” – Warface on ‘T9C,’ duo dynamics and more! 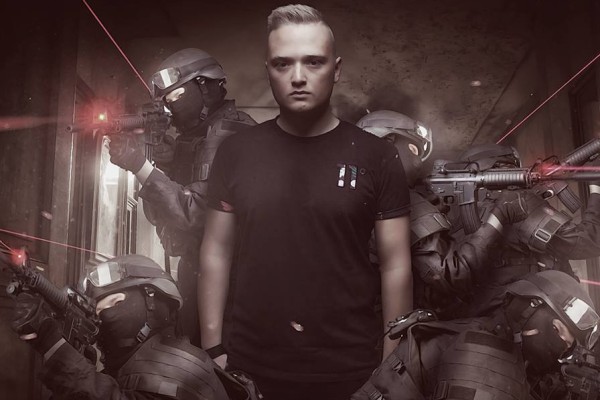 Known as one of the most successful duo’s, Warface is renowned for growing into one of the most prestigious acts in the hardstyle scene. From the beginning of their journey, Youri and Remco have endeavored to do something different with their sound, resulting in the conception of an undeniably rough, edgy and underground approach to music. After releasing their first album “Art Of War” in November, 2014, the guys are back again with clever conceptual album “The Nine Circles,” which is promised to take listeners on the ultimate voyage through the depths of hell. I decided to catch up with front-man Youri to chat about his studio dynamics with Remco, some Summer highlights and of course, his well-anticipated album.

– Hi Youri, first of all, how are you going today?
A few weeks ago I was really sick and spent a lot of time in bed, but thankfully I’m feeling a lot better now!

– How has your Summer been so far? Can you tell me about some of your highlights, whether personal or music-wise?
Music wise, it’s been the best ever Summer for me, I didn’t expect to surpass the summer of 2014 but 2015 has been amazing! I’ve played at so many great events and there’s still a lot more to come, including Defqon.1 Australia next week. My schedule has been so crazy but I managed to go on vacation which was really nice.

– So let’s get to the big news! After the huge success of your first album ‘Art Of War,’ you guys are back again with a second album ‘The 9 Circles’ – can you tell me more about the album?
Actually, we had the idea before ‘Art Of War’ but we decided to use this idea for a second album as we wanted our first album to make its ‘statement’ in the scene and initially introduce the Warface sound. ‘The Nine Circles’ is a lot more difficult to understand for fans who are hearing our music for the first time so we decided to use this for the second album.

In terms of the concept, Remco got the idea from the metal rock scene – every band in rock uses a ‘theme’ in their album. All of the tracks are diverse but still correspond to this theme. Ultimately, for ‘T9C’ idea, we were inspired when we saw a book about Dante and his journey through hell and we had this idea to use that story throughout the album.

The story consists of nine circles and the deeper you go in, the darker and creepier it gets and you can hear that in the album; we start off more accessible and end more dark and experimental. It’s not something we do normally but we’re more than satisfied with the end result! I can’t wait to release it! 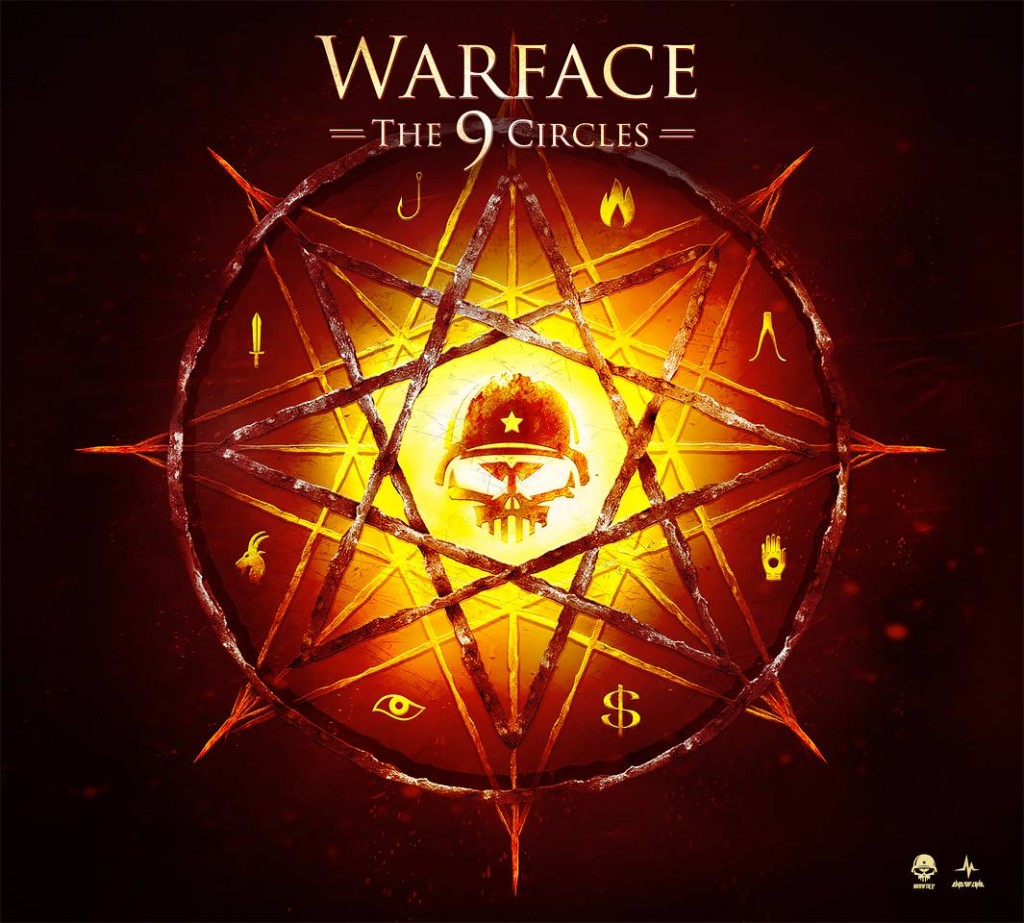 – And along with ‘T9C’ you will be doing a documentary. Can you tell me some more about that?
When I was young, I followed every big artist through their social media and I remember how awesome it was to see the artists give you a glimpse behind the scenes, this is also something that I want to give back to my fans. It’s not a documentary about my whole life, but it gives a look at how Warface grew between ‘Art Of War’ and ‘T9C’. We will give you some studio footage and a story of how tracks are build up, backstage footage and also interviews with other artists that we have worked with.

– Why did you guys want to release another album so soon after ‘Art Of War?’
Well, Remco is a machine in the studio! *laughs* When we started ‘T9C.’ we even had ideas for the 3rd and 4th album! It’s all going so fast and we work really efficiently so we didn’t see any problem with releasing another album.

– So you’re releasing T9C at Supremacy this year – what does this party mean to you?
Last year, I did my first live-act at Supremacy and Minus Militia released their album there, it was so sick and such a great first edition! For me, Supremacy is along the lines of other big indoor parties such as Hard Bass and Qlimax, there are 10,000 people from front to back going crazy the entire night and the vibe there is incredible! For me, Supremacy is the best indoor party!

– You’ve previously stated that you and Remco work together on the Warface project. What are the dynamics like between you?
Back when I was organising parties in my village, Remco always used to be the hardcore act at the end of the night. Back around 2001-2003, Remco used to produce hardstyle and around 2009, when B-Front became quite popular, Remco picked it up again and was interested in starting an act for it. As he also has his career in hardcore on the side, he suggested that we do Warface together where I would be the face and he would be behind the scenes. In the studio, I work with him around 2-3 times per week and we build the tracks together and discuss how they should sound. It works really well for us!

– Do you think that fans/the public are bothered about the ‘Warface’ dynamics?
Since the beginning we’ve been very honest and open about it and we don’t see it as a problem, I don’t think that the fans and public should complain. It’s sometimes exhausting to explain that we’re a duo and sometimes we get the whole ‘ghost-producing’ thing thrown at us, so we like to make it clear to the public that Warface consists of two people.

– Over the past few years you’ve risen quite quickly in the hardstyle scene – why do you think you’ve reached such a huge success in only a short amount of time?
I don’t know! Warface is something different and has its own style so maybe we came into the scene at the best time in 2014 with the first album. I think it’s a combination of time and what the people want.

– Your live-act is one of the most renowned in the scene – what’s the idea behind the costume and concept?
My logo is a skull with an army hat on it and the idea was there from the beginning to use that logo in the live-act. Besides that, the act fits around the name and style. Music-wise, in the 30 minute live-act I always say “I want to make the dance-floor into a warzone!” and people go crazy! I put a lot of tracks into 30 minutes, so there’s a lot of energy and quick mixing. In the future I would like to expand on the live-act and make it something very exclusive. 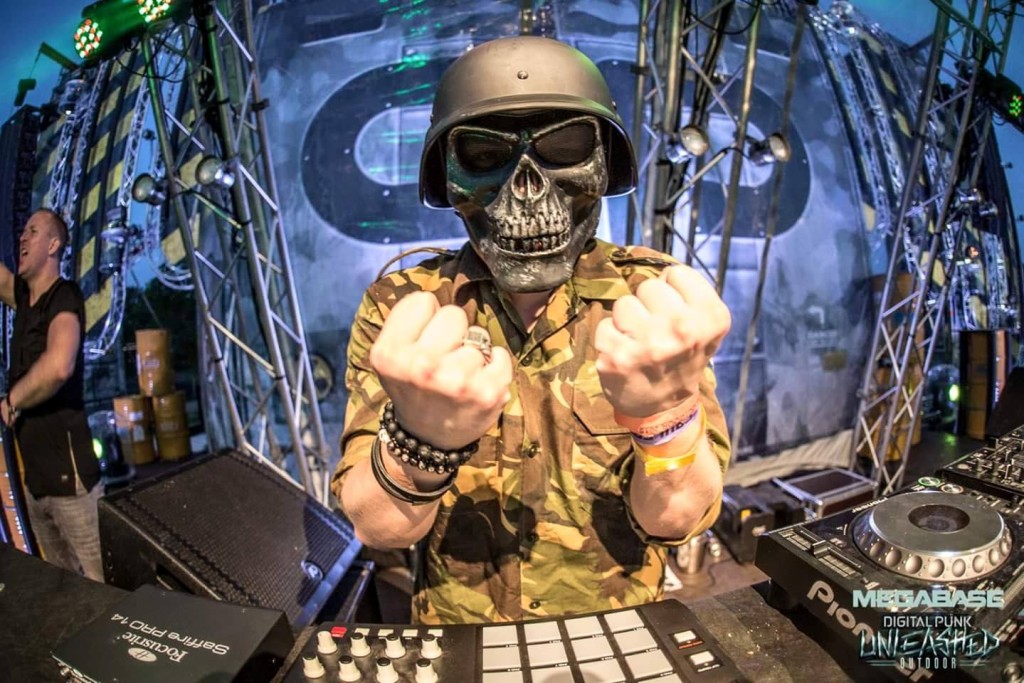 – Your sound is one of the roughest and hardest in the scene – do you worry that it’s too hard for some of the hard dance demographic, such as the USA or for mainstages?
I don’t know because personally don’t think I’m the hardest in the scene, there are a lot more producers with more of an underground sound. For international bookings, I’ve already had a lot of fans in America who really want Warface to play there, so it would be really great to play there in the future! This month I’m also heading to Australia for the first time, they’re more than ready for the Warface sound! 😉
As for mainstages, it is possible for me to play on a mainstage, Intents Festival back-to-back with E-Force is a prime example!

– By the looks of all of the Warface merchandise I see at festivals, it’s clear that you have an extremely dedicated fan-base, how does it feel to have built this from your music and act?
It feels unreal! I’ve always said to respect your fans from the beginning because they’re the ones that can make or break you. I’m very in touch with them through social media to discuss tracks and other things, it’s so important to make time for them. At parties, it’s so surreal to see my logo on shirts, flags and hats – I think it’s safe to say that I have one of the most dedicated fan-bases in the world!

– What is your favourite track on the album and why?
That’s a difficult question! I’ve got a lot of favourites on the album but if I look at a track with a great story-line it would have to be “Fuck You, Pay Me.” It’s a part of the ‘circle of greed’ section and it really brings a similar atmosphere to “FTP,” which is something that the fans will be excited about. It has great vocals that everyone can scream at parties and for Remco and I it’s definitely one of our favourites.

– Most awkward fan situation?
I’ve had a lot actually! For the past two years I’ve stayed on the regular camping at Defqon.1 with my friends so that I have the chance to spend more time with them throughout that weekend. During this weekend I always like to make time for my fans when they come up to me on the campsite, however I’ve had guys coming up to me asking for a photo when I’m in my underwear and about to take a shower!

– Weirdest place you’ve woken up after a huge night out?
In my bathtub! I had a heavy night out and the next morning I woke up when my Dad was knocking on the door. I opened my eyes and realised that I was naked and in the bathtub… I thought “What the fuck have I done…?”

– Have you ever stolen anything?
Back when I was around 10, my friends and I used to sometimes steal candy from a little bakery in our village. That’s the only thing I’ve really stolen.

– When was your first kiss?
When I was around 14 years old there was this little bar in my village where they would let ‘children’ in. We used to go there every weekend up until my friends and I turned 16 and my first kiss also happened in there.

– Finally, what did you eat for breakfast today?
I had a glass of peach iced tea! Good stuff!

Thanks for chatting with us Youri! We wish you the very best with the release of ‘T9C’ at Supremacy and we can’t wait to see the public’s response on it! For more exclusive ‘raw week’ content, don’t forget to head to our homepage to check it out!


Great interview did not know Warface was a duo love their sound tho. America is ready guys please come California loves the harder styles.