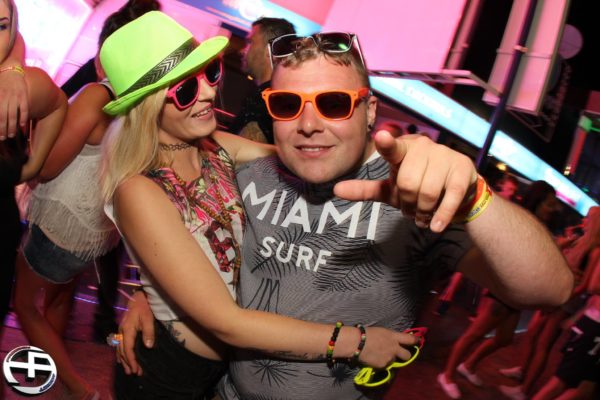 I’m a dedicated fan of UK Hardcore music but as I don’t live in the UK, I don’t get too many chances to catch major artists at events! Thank heaven then for HTID In The Sun, the UK Hardcore scene’s most infamous party, which took place a few weeks ago over four hot summer nights on the Spanish holiday island of Mallorca.

So what went down on this year’s rave holiday?

It’s about 7am and I’ve just checked in for my flight from London to Mallorca. Sitting in the departure lounge getting stuck into a bacon roll and a coffee I’ve already got pre-rave butterflies; I can’t believe I’m back here again, about to embark on a four night rave holiday featuring literally all of my favourite DJs and MCs.

This nervous excited feeling stays with me every step of the way, even my shuttle bus driver doing his very best to try and drop me off at the wrong hotel, in the wrong resort, can’t dampen my spirits!

Eventually the raving hour of 10pm arrives and there’s a queue around the block when the doors to Boomerang nightclub open. I’d say Cotts & Ravine are getting the crowd warmed up but there’s no warm up required, no standing around with a drink being politely social, the dancefloor is simply packed right from the very start! 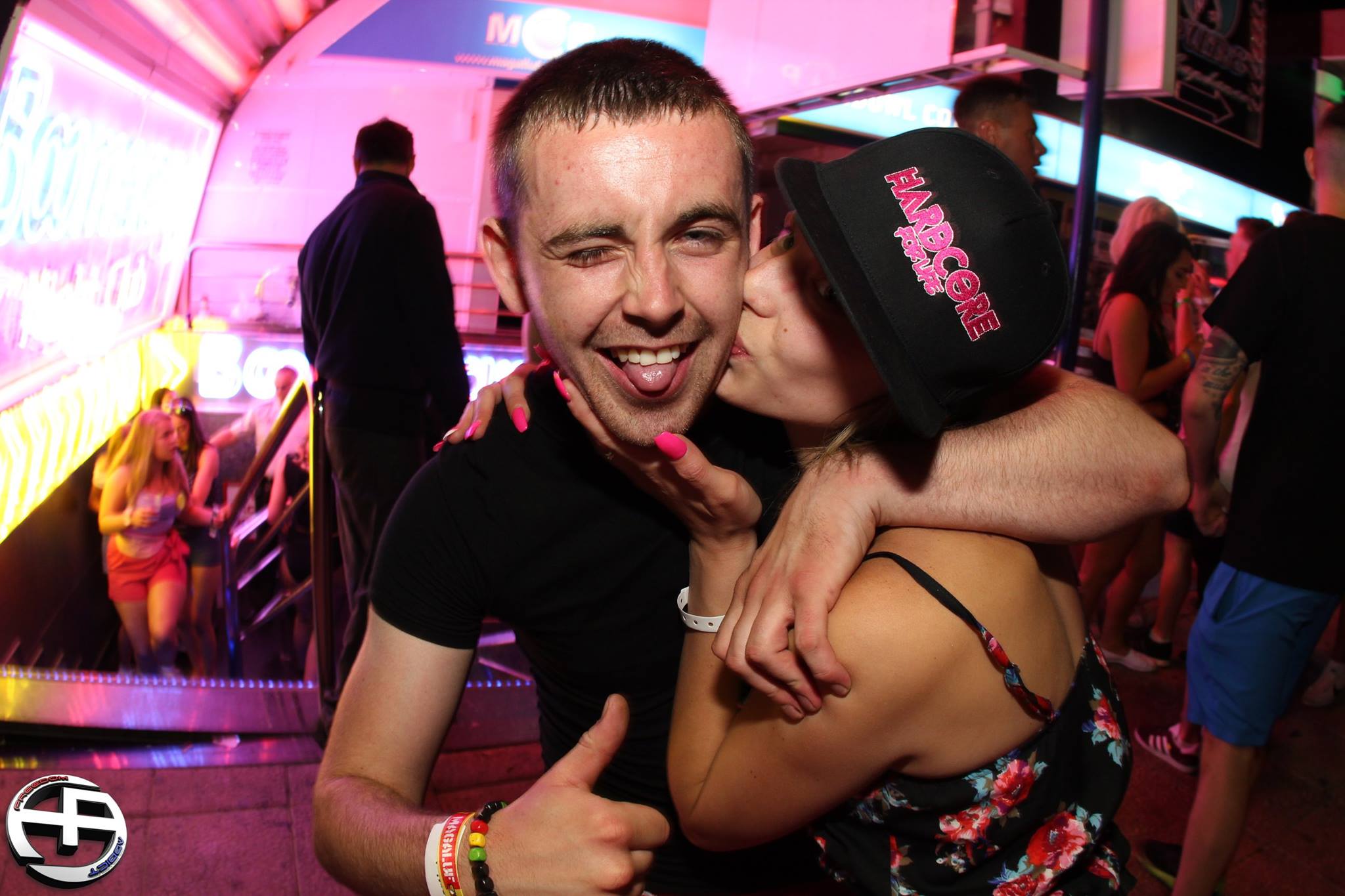 Next up and delivering quite literally an outstanding set is Callum Higby. Comments along the lines of ‘OMG this could actually end up being my favourite set of the week’ are flying around, as tracks like “Right Here” and “TMA” have the dancefloor jumping and fans crowding around the DJ booth eager for a glimpse of their newest hero.

Even just a couple of years ago it would have been hard to believe that a UK Hardcore crowd would be so receptive to the style now being produced by artists like Callum Higby and Gammer, who takes over now for his first set of the week.

There’s a stage area between dancefloor and DJ booth which is intended for the MC but it’s packed with ravers dancing so, for much of Gammer’s set, MC Whizzkid gives up trying to clear the stage, instead MCing from inside the booth.

Could there be a tougher challenge for any DJ really than to follow on from Gammer, at peak time, in front of a crowd comprising some of the most dedicated UK Hardcore fans in the world? A test indeed for almost any UK Hardcore DJ, but how about for a Hardstyle DJ? Atmozfears regularly steps up to play in front of festival crowds of thousands; tonight is an intimate club gig full of hyper-enthusiastic punters, but, they’re not ‘his’ crowd. How is this going to work out?

I’m delighted to report that everything worked out beautifully. Within the first minute Atmozfears has successfully caught everyone’s attention with the opening bars of his “Come Running” remix and from then onwards it’s mash ups and quick mixes all the way, proving that he can hold this crowd captive and also that the ravers know their Hardstyle and are hungry for more.

The godfather of HTID, Hixxy, takes over now at 2am accompanied by the first appearance of the week by MC Storm who as ever brings to the show his virtually uncontainable levels of energy and enthusiasm. No sooner have we finished rocking to Hixxy’s “Don’t Stop (Monoday)” than it’s time for Alex Prospect. 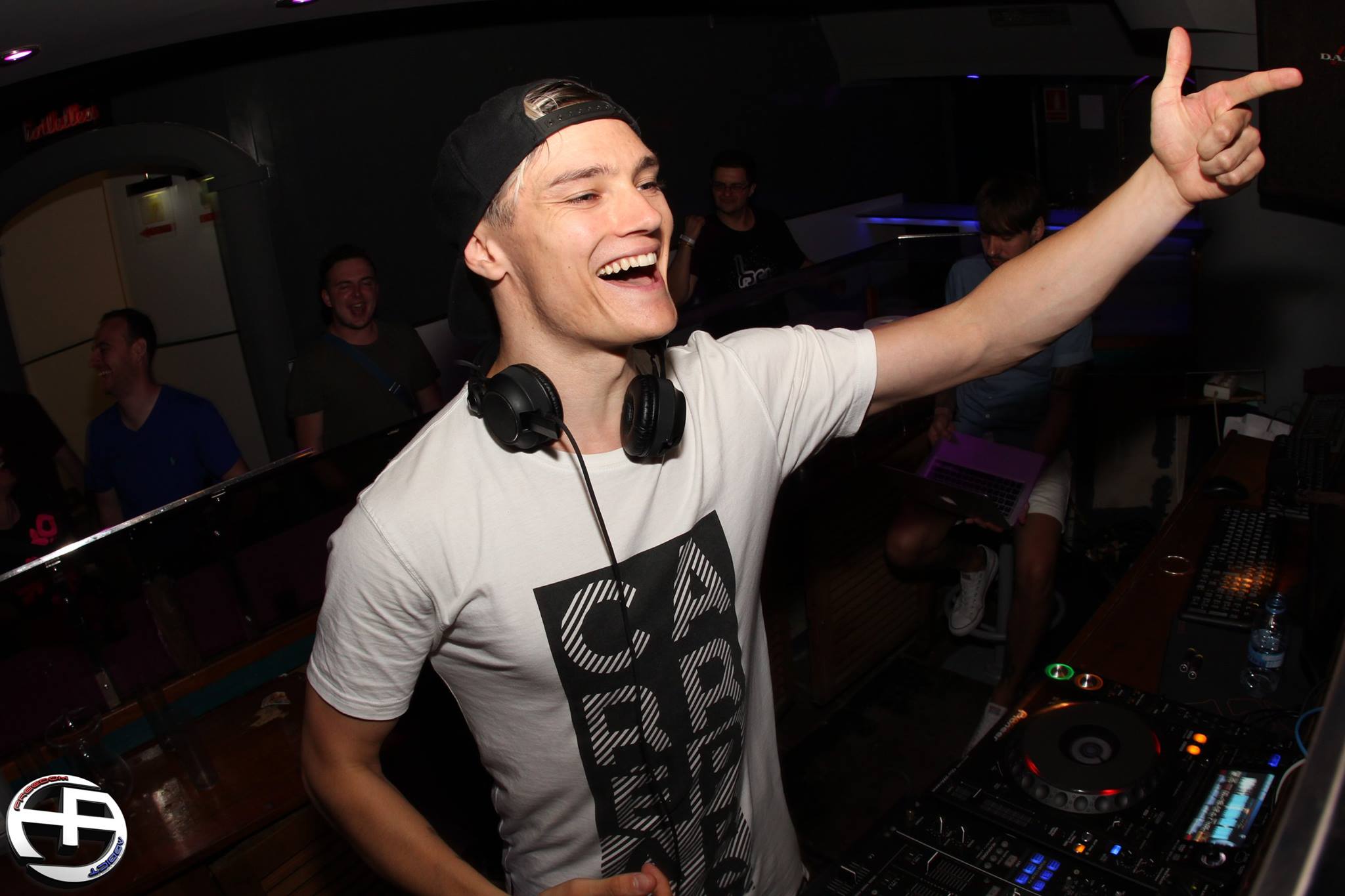 As tonight is the first night and everyone’s been up since early to catch flights, the last set finishes at 4am but Alex Prospect has kept us so well entertained for that last hour, with a wicked selection of tracks from his albums “Dedicated” and “Remixed”, that absolutely no one yet looks ready to call it a night!

Upon leaving the club and realising that it’s only 4am, I know there’s absolutely no chance of me staying awake until hotel brekkie starts at 8am. As I’m pondering the available sources of pre-dawn sustenance, a friend helpfully wanders over and announces that around the corner is ‘the worst kebab shop ever, but it’s actually great’, and with that excellent culinary recommendation, my night draws to a close.

Tonight we’re at Carwash nightclub, aptly named perhaps as tonight is the foam party. Right as the doors open I spot a crew who have put together perfect outfits for the occasion, complete with shower caps, inflatable swimming rings around their waists and bath sponges on sticks.  During JTS & MOB’s set, one girl jumps up on stage to tickle MOB on the nose with a bath sponge! 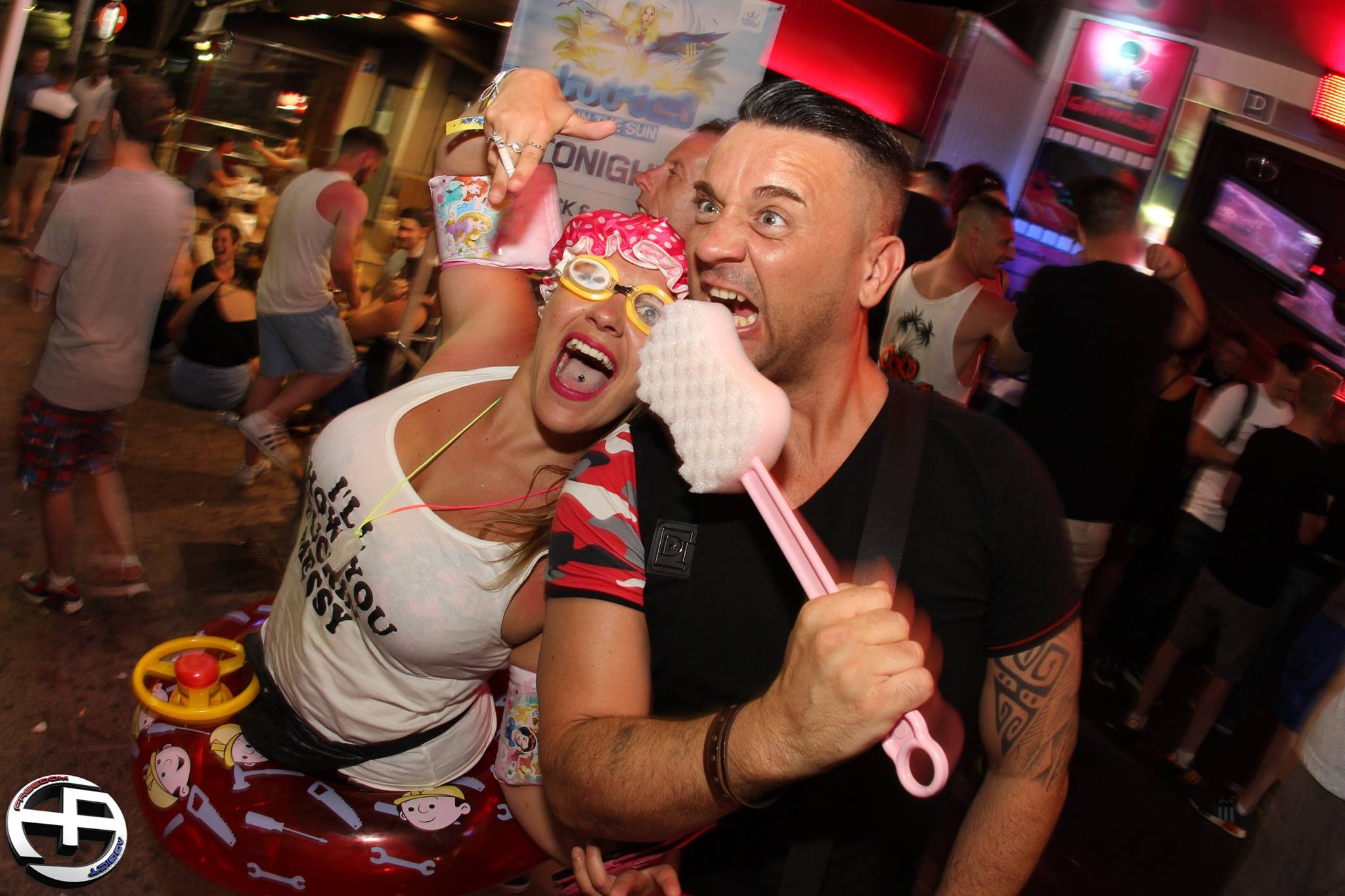 Macks Wolf is up next, with MC Keyes, and once again I’m so pleased to see that the UK crowd, even on holiday, are so into not just new music but music that is treading new paths. Macks Wolf’s set includes his new remix of “Amigos” by Styles & Breeze, which he’d been working on for many months but finally finished just this week in his hotel room – inspired perhaps by the Magaluf sun.

Which leads nicely into talking about our next DJ, Darren Styles. This wonderful human just seems to never get old and I’m not just talking about the man himself, but his appeal to fans everywhere. I’m lucky enough to get up in the DJ booth for a while during the set and watch Styles in action; he even looks like he’s the happiest man alive as he drops masterpieces including “Us Against The World”, “Quiver” and – did you catch it? – his brand new collaboration with Da Tweekaz!

Half way through Styles set, the foam party commences! Without any warning whatsoever, foam starts to pour from the ceiling into the sunken dancefloor and within no time at all it’s up to neck height! Even those of us who have retreated to the nearest bar area (cos, you know, I’m not scared or anything I just can’t risk losing my phone, right?) find the foam is up well over our knees.

The ravers are absolutely loving the foam and everything’s looking delightfully frothy and messy as DBSTF take over the decks. Well I’m still not sure if DBSTF have ever played a foam party before but the guys knew exactly the right recipe for success tonight, by playing an awesome ‘Happy Hardstyle’ set – yes I know that’s not technically a genre but it’s happening more and more – Hardstyle brought up to a faster tempo to blend in on UK Hardcore nights. Definitely one of the biggest and best surprises of the week. 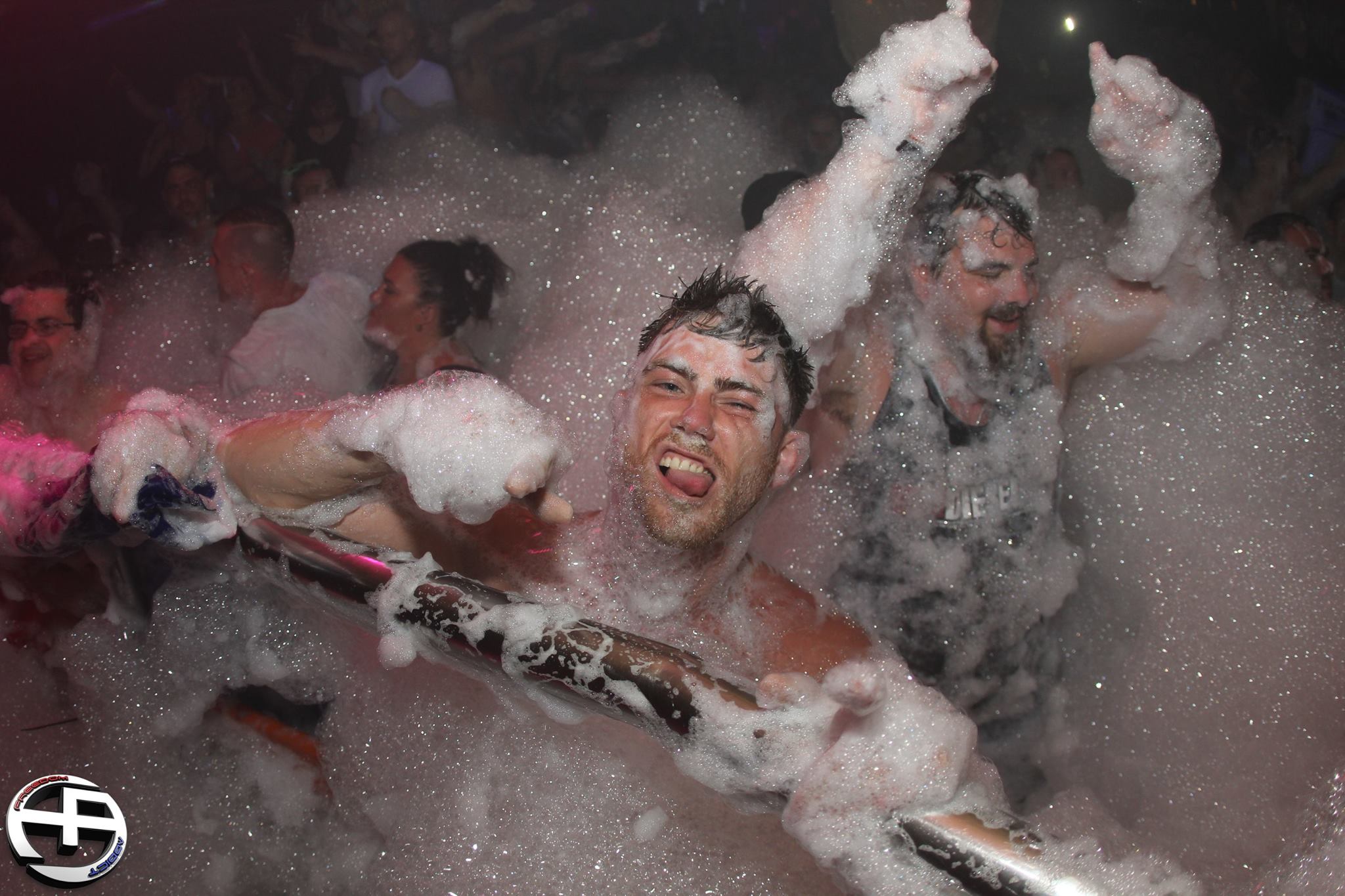 Up next is Breeze with MC Storm, with more foam pouring from the ceiling, UV lights and strobe lights flashing on the foam and more of those infamous red drinks pouring at the bar! When Audiofreq takes over at 4am I’m not sure what to expect but I have the utmost faith that he will deliver, and he does, taking over both the decks and the mike for a captivating set that flips all the way from hands in the air euphoria to hard as nails, wrapping up with some of his own new unreleased UK Hardcore.

Also taking MC duties into his own hands is Joey Riot, who closes the night with his buddy Kurt, of course it’s a pumping set of their signature Powerstomp sounds – a perfect end to a musically diverse and incredibly fun night.

As we leave the club at 6am there’s plenty of ravers – and DJs – still around who will need to be up bright and early for the boat party, which sets sail at midday!

To be continued…. We’ve still got a boat party and two more nights of raving to go!


The best 4 days of my life! I would do it all again in a flash!