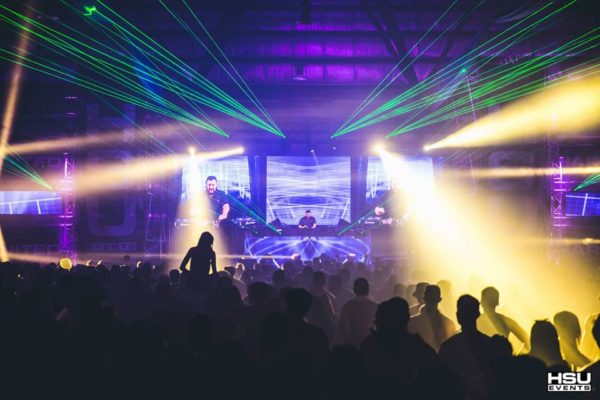 Somehow whichever way you look at it January always seems like one long hangover, don’t you think? February meanwhile has all us all springing back to life and back to work, with the holiday season well and truly over there’s an incredible amount of new music coming out to delight our ears and make us move our feet. Here’s our monthly round up of all things new, bright and shiny in the UK Hardcore scene!

Cover photo: The godfather of UK Hardcore, DJ Hixxy, at Midnight Mafia in Sydney a couple of years back. Hixxy will be returning to Midnight Mafia this year with his long-time accomplice Dougal for an exclusive back-to-back set! The event take place on Sat 13th May at Sydney Showgrounds.

Darren Styles and Gammer are touring the USA over the next few weeks and in a somewhat shocking turn of events have indicated that the “Feel Like This” tour will be last time the pair ever play back-to-back! To coincide with the tour, this week sees the long-awaited release of the already huge anthem “Feel Like This”.

A few weeks ago my social media feeds suddenly went crazy with mentions of one new artist name – Relect. This incredibly talented young man from Japan has just turned 20 years old, yet there is a level of sophistication in his productions that many seasoned artists would still aspire to achieve. Unleashing his music on the world from all angles at the start of this year, Relect has already sent the scene into a spin with tracks such as “Everybody In The House” (Scarred Digital) and “The Only Way Is Dominator” (Go Hard Digital). With the latest news from Relect being the announcement that he has signed to Lethal Theory, it’s clear that he has a very exciting future ahead!

Lethal Theory has a major new event starting up in the UK; next month the first edition of Religion will take place at Halo in Bournemouth featuring Darren Styles, Joey Riot, Kurt, MC Whizzkid and Lethal Theory’s groundbreaking live act The Order. Led by MC Obie, The Order create a unique audio-visual experience for each show, with specially designed visuals mixing live in sync to the DJ’s mix. Premiered by DJ MOB, MC Obie and MC Mayhem at Westfest 2016, DJ Alex Prospect will also be joining this splinter cell group to cause extreme chaos on the dancefloor at Religion!

Another Lethal Theory MC, MC Thunda has just released a kick-ass new mix tape (I love this oh-so-retro phrase!) along with MC Riddle (Justice Hardcore) and DJ Summa Jae (Futureworld). “Summa, Hale & Thunda” is a perfect showcase of all three artist’s talents, with MC Thunda and MC Riddle taking it in turns to smash out sharp, quick-witted lyrics throughout the mix. Not to mention that this mix also features a ton of piping hot new tracks that I have yet to hear anywhere else – keen for new Zero Hero material, anyone?

It’s been freakishly hot and sunny here in Sydney this last week, even by our usual standards, so when I went out for a run the other morning listening to a podcast I was really only half listening while my mind was wandering to existential topics such as “Why the fuck am I attempting to run, it’s already at least 27 degrees out here”. Suddenly an amazing tune came on and my mind snapped back to full attention thinking “This is some mighty fine UK Hardcore, I need to know what this is right now!”, which was a perfect excuse to stop running and concentrate on rewinding the podcast instead.

Of course I should have known that this masterpiece was the work of none other than Scott Brown, teaming up with vocalist Ceci to create this beautiful chilled melodic track, “Stay With Me”. Scott Brown fans should stay tuned to AAN for a special treat during our Hardcore Week, which is coming up very soon!

“Stay With Me” is absolutely the perfect track for a hot sunny day, which reminds me that Scott Brown has been confirmed as joining the all killer line up for HTID In The Sun! With recent announcements also including Callum Higby, Macks Wolf, Alex Prospect, Fracus & Darwin, Stonebank, Chris Unknown and Kevin Energy joining the likes of Darren Styles, Gammer, Mark Breeze and Hixxy at BCM Planet Dance in Mallorca over four nights from Weds 7th June to Sat 10th June, oh and that’s with all-inclusive bar, new owners HSU Events have promised a game changer and we know they will deliver!

Psytrance is really becoming a big influence all over the hard dance scene at the moment. Go Hard Digital label head Clarkey has harnessed the mind-bending power of the psytrance sound and got together with Jakka-B to create a bewitching new track named “Nasnas”, which has an almost supernatural feel and even brings us a little lesson in Arab folklore in the track title – a nasnas is a monstrous half human, half demon creature with literally half a head, half a body, one arm and one leg. It’s sneaky, evil and incredibly powerful!

Japan’s M-Project and Muzik Servant bring us their latest release “Muzik For Da People”, in which a bouncy upfront melody breaks down into the echoing roar of the crowd, overlaid with a frantic burst of pianos. “Muzik For Da People” dropped last week on Scarred Digital, just as label boss Sc@r herself announced the exciting news that she had just completed a remix for her favourite label, the legendary Kniteforce. Keep an ear open for DJ Sike “Bongo Bong” (Sc@r remix) in the coming months!

Continuing the vibe of his former label, Robbie Long’s Thin N’ Crispy, D-Lyte’s new label Legitimate Recordings continues to deliver a quality run of brand new productions with a nod to the sounds that have gone before, the latest being “Travelling” by In Effect. For a preview of other forthcoming Legitimate Recordings tracks, also check out D-Lyte’s new mix “South Coast Business”.

Ravers in Sydney last week dressed to impress in camo and kandi as they marched into battle at the OneSeventy – Core of Duty rave! Label-wise OneSeventy has been pumping out the releases lately, next up will be JTS solo track “Messin’ With My Head”, while current release “Torn To Pieces” by Technikore and Weaver is doing some serious dancefloor damage and is sitting in the top spot on the Beatport hard dance chart as I write this.

Chatting to AAN towards the end of last year about “Torn To Pieces”, Technikore revealed that his peers had actually persuaded him to toughen the track up: “… the track had a really girly, sing along vocal in the breakdown which I was really feeling, but Weaver was being too polite to tell me he wasn’t keen… then Joey Riot heard the track and was going crazy for it, but said he hated the vocal!”

Eventually the vocal was swapped out for something more aggressive, resulting in a really powerful track! “Shut up and put the record on… crank up the fucking volume!”

Hope you enjoyed getting your ears around these amazing UK Hardcore tunes! Which UK Hardcore tracks, artists or events are getting you pumped up at the moment? Let us know in the comments!