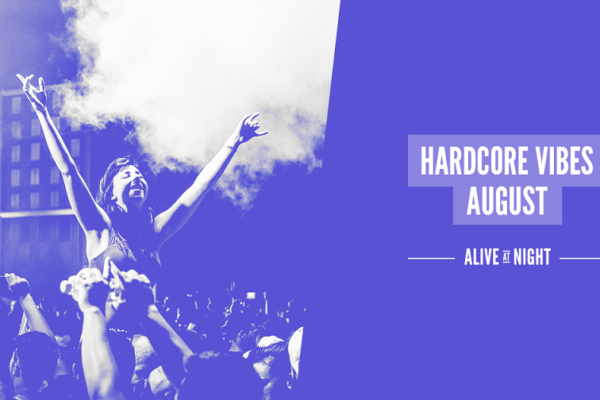 Well I think August has been the fastest moving month yet this year! I feel like I’ve only just finished reading about how much fun everyone was having at Summer Gathering Festival on the last weekend of July, now it’s nearly the end of August and it’s time to wrap up all the glorious new UK Hardcore music that’s come our way this month.

Hold on tight cos we’re going on a rollercoaster ride through some fast euphoric beats and picking up a few classic old school rave vibes along the way!

Brand new music first up this month from Jekyll; “One More Night” is a powerful, emotionally charged vocal track which really stands out from the crowd. Jekyll himself kindly gave AAN an insight into the creation of “One More Night” and what the track means to him:

“When I first heard the vocal it really stood out for me. I always thought organs, as in the keyboard instrument, gave a really nice atmosphere so that set the mood of the track and big lead synths are just a key to my heart. “One More Night” is a track that made me grow as an artist and is an experience I will take with me on the rest of my journey.”

Right from the get-go you know that Jakka-B’s new tune “Lost In The Rhythm” is going to pack a seriously hard punch, there’s even a screech in the intro before the first breakdown. The breakdown brings in the trademark Jakka-B soulful vocal and wistful melody but don’t be fooled, those screeches are back with a vengeance after the drop. “Lost In The Rhythm” is released via Bandcamp and there’s even a 150bpm mix available too!

Outforce has premiered a mighty fine new track this week, “Feelin’ H.A.R.D”. Propelled by majestic leads and packed full of euphoric summer feels, “Feelin’ H.A.R.D.” will be a definite fan favourite in no time; let’s hope it goes on to get the full release that it deserves.

Representing the sounds of the Scottish underground, Hotchkiss & Davie Black are bringing a highly charged dose of passion and energy to the dancefloor this month with “Don’t Look Down”, a sure-fire anthem for the last weeks of the summer season.

After the success of last year’s “Gridlock” album, Technikore and JTS are already busy cooking up their next album, with some very exciting track snippets starting to appear on their social media.

In the meantime the final piece of the “Gridlock” puzzle falls into place with the last full track release from the album – the Technikore & JTS remix of Hixxy & Re-Con “Superhuman”.

Technical Difficulties are taking us on a little trip back in time with their new release “Class 90s”. “Class 90s” certainly does have the classic house style vocal and the breakbeat which perfectly sums up the early sound of ‘rave music’ for those of us who are old enough to remember. “Class 90s” is indeed an excellent taster lesson in the sounds of the 1990s.

If that left you longing for more old school breakbeat goodness, the only place to go for a full breakbeat history masterclass is Kniteforce Records and handily, label head Luna-C has just launched Kniteforce Radio, streaming music and mixes from Kniteforce artists and associates 24/7, with regular guest shows from names such as Brisk, Sc@r, Saiyan and of course Luna-C himself.

Canadian artist Saiyan has recently taken over as label manager at KFA Recordings, the modern hardcore sister label of Kniteforce. Luna-C has made the strategic decision to concentrate on producing and selecting music on the old school tip for his Kniteforce and Knitebreed labels, and has handed over the reigns of KFA Recordings to Saiyan. Saiyan, who has been heavily involved in the scene for many years in North America and beyond, already looks like he has lots of new plans and ideas lined up so I think we can expect some exciting new developments from KFA Recordings in the near future!

Scarred Digital has just celebrated its 5th anniversary, with the label continuing to develop and promote new talent from around the world, as well as working with some well-known names. Sometime early last year I remember picking up a track by M-Project, Sc@r and MC Vibrance named “Hybrid”; unbelievably it’s only just been released so I’m featuring it again in case you missed it – powerstomp meets yet more of those old school breakbeat vibes!

Westfest is always a highlight of the UK winter rave season and the line up has just dropped for this year’s edition, which will take place on the night of Saturday 28th October, featuring a strong UK Hardcore representation with The Order, Gammer and Klubfiller all on main stage and a stacked Hardcore Heaven stage featuring Fracus & Darwin, Dougal, Breeze and many more of the usual suspects plus a very exciting set entitled Rise of the Old Skool Soldiers, the soldiers being Slipmatt, Vibes, Force, MC Charlie B and MC Livelee unveiling their new live show concept.

One of the UK’s biggest mainstream dance music festivals, Creamfields, has always dipped its toe into harder dance music and this year features UK Hardcore legends Darren Styles and Scott Brown on Kutski’s Keeping The Rave Alive stage on Saturday. Kutski himself will of course also be playing and one track I’m very confident we’ll be hearing in his set is the new Kutski & Joey Riot remix of Kit Hype’s “Countdown”.

“Countdown” is the latest in a series of tracks to have graduated from being speeded up as part of the “Does It Sound Good At 170” feature on Kutski’s weekly podcast, to becoming an official 170bpm remix.

Quite literally a song about the countdown to the weekend, “Countdown” has so much bouncy energy that it was clearly crying out for a faster remix; this remix keeps all the excitement of the original and adds a twist of classic European happy hardcore style beats to create a perfect party anthem.