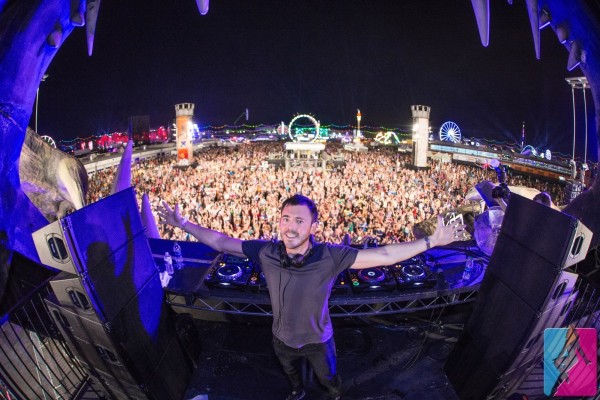 It’s time to check your preconceptions at the door because UK hardcore has been given a full on revamp over the last couple of years, revealing a whole new sound. UK hardcore is all grown up and taking on the world, bringing fast beats and fun times to a dancefloor near you.

Just over a year ago, a crew of legendary UK hardcore artists Darren Styles, Gammer, Re-Con, Dougal and Breeze & Whizzkid joined forces to create a new label named ‘Together We Rise’ and launched the platform with a huge NYE rave. From the very start, the Together We Rise sound was clearly something new and soon attracted some very public respect from the hardstyle scene, in the form of some high-profile official remixes of hardstyle tracks.

First up was the brilliant Darren Styles edit of Code Black & Atmozfears’ track “Accelerate,” followed up a few months later by Kutski and Gammer’s remix of Omegatypez’ “Take Me High.” In the early days of raving, DJ’s might have made hardcore by speeding up other people’s records…Now producers are being licenced to bring a 170BPM flavour to successful hardstyle tracks; although occasionally they still cheekily speed the original up first to see what might work, as Kutski did on his podcast with Take Me High. Who would’ve thought that the outcome would be a hugely successful remix?!

One hardstyle act who got on board with the UK hardcore crew earlier than most was, of course, Da Tweekaz. With the duo being renowned for their fun-loving approach to music, it made perfect sense that we saw an official Hixxy remix of Da Tweekaz’s “Break The Spell,” followed by Da Tweekaz remixing Darren Styles and Gammer’s “You & I” as part of their #Tweekay14 project. Most recently, the duo took on the task to remix Darren Styles & Re-Con’s track “Rest Of Your Life,” which resulted in one of their biggest remixes to date!

Of course, the ultimate crossover for an artist is to be working in both the UK and Dutch hardcore scenes at the same time in their career. One very busy individual that is first to cross my mind is Joey Riot. Also known as one-third of the hardcore act Destructive Tendencies, Joey Riot has played at pretty much every European festival that has a hardcore stage this past year. Still producing and performing under his signature powerstomp style, this piloting producer from the UK is also leading his successful label ‘Lethal Theory.’

An exciting international name on the Lethal Theory artist roster is Japanese artist M-Project. Having had a long-time following in the Japanese and Spanish scenes, M-Project is now making big waves in the United Kingdom scene and will be playing his first UK events next month, including appearing as a headline act at the huge ‘We Are Hardcore: The History Of Hardcore Part 2’ event alongside the very biggest names in the UK.
M-Project has created some amazing tracks which sound both bouncy and dark at the same time, a lethal combination indeed. I recommend that you check out tracks like M-Project & Riko – “The Underground” and M-Project & Al Storm – “The Twilight Zone,” which I have posted below.

Lethal Theory is also home to a particular artist who’s rapidly rising up the ranks and has been widely tipped as “the future of UK hardcore,” Alex Prospect. Having already been heavily involved in the scene for a few years, Alex Prospect spent most of 2015 in the studio working on an artist album, “Dedicated,” which features collaborations with major artists including Gammer, Joey Riot and Darren Styles. The various producer and vocalist collaborations on the album have created a cracking range of tunes all bound together by a distinctly UK Hardcore upbeat vibe. In his expertly crafted DJ sets he not only plays his own productions, but throws some serious classics into the mix too.

Something you would be bound to notice is that in the world of UK hardcore, the names of certain key players do pop up quite regularly and those with an interest in older-rave music will know that many of those names have been around for a long time. But remember, UK hardcore is not a genre with heavyweight corporate investment like we see in the hardstyle or EDM scenes, it’s a smaller industry with a proportionate number of big names, but those leading artists have a huge global presence and influence.

The golden boy, the leading light and the household name is, of course, Darren Styles. Known also as one half of ‘Force & Styles’ in the ‘90s and ‘Styles & Breeze’ in the ‘00s, Darren Styles literally plays at some of the biggest parties in the world, such as the epic EDC Las Vegas, for starters!

In December 2015, Darren Styles played for the second year running at the huge, predominantly-hardstyle event ‘Knockout Circuz’ in Sydney, kicking off his set with a special edit of the classic “You’re My Angel.” It’s these little reworks, combined with some of the hardstyle and reverse bass influences in new tracks and of course the remixes of hardstyle tracks, that now make it easier than ever for an event to slot in a UK hardcore set. By incorporating UK Hardcore into a hardstyle line up, this provides a refreshing change of pace and increased variety without making the night seem disjointed. Of course it still might be a while before we see this happen in The Netherlands, however in the broader scene, multi-genre mainstage line-ups are becoming increasingly popular.

The aforementioned hardstyle influence is clearly evident in the melody of the new track from Mark Breeze, entitled “Be Alone.” This melody is something that could easily be right at home in one of the new-generation melodic hardstyle tracks.

In case further proof were needed of this genre cross-pollination, literally as I was in the middle of writing this article, Alex Prospect posted on Facebook that he was in the studio with legendary Sydney-based producer Weaver “making some hardstyle powered 170.” I seriously cannot wait to hear the results of this exciting collaboration!

Speaking of Australian producers, UK hardcore A-lister Technikore has migrated to the Australian scene on a permanent basis and has teamed up with leading Australian producer JTS to launch a brand new label, ‘OneSeventy.’ Building on the pure UK hardcore brand developed by JTS at his OneSeventy events, the new label is set to bring us top quality modern UK hardcore productions, as evidenced by their first release, “Siren” feat Emi, which drops this month! Check out the epic melody and the vocals in this track!

In case all these beautiful melodies are making you feel a bit uneasy, let’s move to the harder end of the UK sound and for this look no further than Scott Brown. For over 20 years now, Scott Brown has been at the forefront of the UK rave scene and he literally hasn’t stopped. Releases have been coming thick and fast for the last couple of years on his label ‘Evolution Records,’ with a standout on the harder end of the scale being his devastating track “Promise.” From the epic breakdown introduction, to the kicks and to that moment when the track truly turns into bangin’ hardcore, this stuff is exactly why Scott Brown is a total fucking legend!

As we move into 2016, the UK hardcore action continues to gather pace and I just can’t wait to hear what this passionate scene has in the store for the world this year! For those looking to open their minds, I highly suggest that you get cracking and start listening!


Great stuff! Did overlook Hardcore Underground though, which is doing massive work and has been really leading the way on hardcore sounds for years.

Really glad to see Hardcore not only still alive, but thriving!


This is a great write up Nicki, amazing stuff! Is this going to be a regular thing from you?


Awesome read! Very positive times indeed. If you follow this up, do include the Hardcore Underground camp, their contribution over the last 10 years deserves that 😉


I don’t really like UK Hardcore . It just feels … wrong to me. It’s way too soft for the tempo in my opinion. I still respect your opinion, but it’s just not for me.