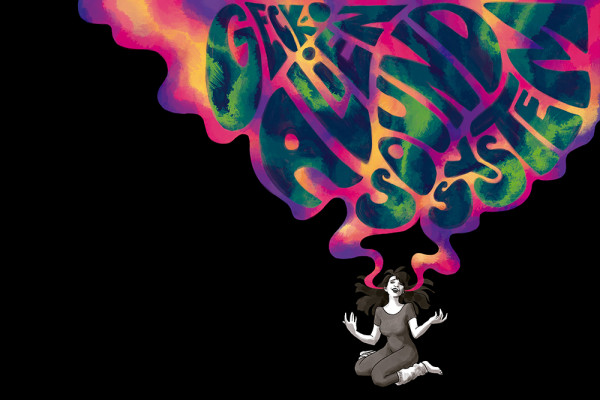 I think that a lot of readers can agree when I say that if Hard Dance music had an award for the most daring producer then Geck-o would be a clear winner. Why? Well, other than the blatant fact that the dude is a chameleon, his audacity to create and spin whatever the fuck he wants is severely refreshing. Whilst fans, organisations and artists have their heads stuck in categorised boxes, meanwhile in ‘trips-ville’ cheeky Gemini Geck-o is trailblazing his own, quirky path.

Personally, I still can’t move past Geck-o’s 2012 release “Soul Train,” and I don’t think that I ever will… But who could blame me? The track itself is the incarnation of pure happiness. Anyway, although there isn’t (and probably will never be) a follow-up of this delightful hit, Geck-o has recently treated his fans to a vast, new selection of experiments. All wrapped together in one bundle of joy, his album ‘Alien Sound System’ should be approached strictly with an open mind.

Leading up to the release, Geck-o revealed the album’s ‘harder’ tracks “Tripper,” “Once Upon A Time In The Feels” and “Straight From The Retrofuture,” which was a good move to grab the attention of his Hard Dance fans. I must stress this again; ‘Alien Sound System’ is made for open-minded listeners who appreciate music for what it is, rather than those that pigeonhole.

Now we have that settled, let’s jump into the ‘Alien Sound System’ voyage and take a look at some of the album’s stand-outs!

The album contains thirteen tracks as well as a continuous mix and necessary DJ mixes for a handful of the tracks. As the cover art suggests, ‘Alien Sound System’ is a wacky, experimental body of work that serves as a portal for Rik’s self-expression. Designed by Marloes Messemaker, this colourful artwork truly suits the music on the album and also brings about synaesthesia (in the best possible way, of course).

The first track of the album, titled “Alien Sound System” is a crunchy, driving tune that perfectly opens the album. The beautiful, overwhelming sound design takes centre stage and not to mention, the wacky vocal is simply awesome! From the very first track, listeners can gather that this isn’t the same-old Hard Dance album – it’s a musical revolution that will shock your senses.

The second track, “Grounded,” reminds me of the ambience at the infamous Tresor in Berlin during the late hours of the morning. For those who don’t know what Tresor is, it’s an underground, dungeon-like club where visitors simply lose all sense of time. From this album and its experimental sound, you can gather that Rik has been heavily influenced by Techno and it’s scene in Berlin.

Next up is “Tripper,” which is a track I’ve had on repeat for the past couple of weeks! Every time I listen to this intense number, I’m able to take a step outside of my own head and immerse myself into a parallel dream-world. I absolutely love the story-line behind this track and its video-clip; so for those who haven’t yet watched the video, get on that shit… now!

Furthermore, I must accentuate how powerful “Tripper” is and the only way I can do that is by stating that it hit me so much harder than the majority of melodic releases in 2016 (sorry, not sorry). Big ups to Geck-o – this one rocks hard!

Listeners are given a little ‘break’ during “Close Your Eyes,” where they’re able to float away on a small voyage. That’s up until the last minute of the track, because it unexpectedly intensifies into a nice climax. Another sweet addition to this track is the little ‘hiss’ at the very end.

Moving on to the next track, “Straight From The Retrofuture” is a personification of its title and one of my personal favourites. It’s super funky (just like the cat), has a real smooth feel to it and that melody is pretty damn adorable.

Followed up by atmospheric number, “All I Wanted,” this one would really fold well into a Techno set. Yes, I know, Techno is quite ‘trendy’ these days, but in my time as a fan I’ve learned to differentiate between the cool, atmospheric stuff and the lame, repetitive stuff. I feel as though with Geck-o’s background in producing ‘soulful’ Hardstyle, he’s able to bring that aspect to the Techno genre, which he executes quite nicely. (PS, Rik, I’d love to go raving with you some time).

Next up is something a lot slower to cleanse the palates. The organs in “Character” strangely remind me of an older Justice track called “Audio, Video, Disco” (go and check it out).

That relaxation was required, because next up is the extremely intense “Surrender” and let me tell you that the sound design in this is out of this world! I’m blown away not only by Geck-o’s skills, but his endless stream of creativity that shines in all of his work. The pounding bass in this track is simply ‘wow’ and proves that you don’t need kickrolls galore to make a statement.

Followed up by “Once Upon A Time In The Feels,” this track brings back Geck-o’s traditional, harder sound. Yep, crunchy, deep kicks are ensured as well as a thrashing atmosphere that builds up to the ultimate climax. This one can be enjoyed by all Hard Dance fans, especially those fond on the older Theracords sound!

Next on the album is “Seeing Is Believing,” which is an experimental gem packed with extremely ‘ravey’ vibes. I can’t pinpoint whether it’s the overall sound or the fact that it’s pitched to around 145BPM, but I can’t help but vision this track tearing the club apart at 6AM, when only the true trippers are left dancing. Absolutely in LOVE with this one and to answer its question: yes, I do believe in love at first sight.

After the eerie “Raising Awareness” interlude, is the second last track “I’m With The Sirens,” which exhibits a tasteful blend of bizarre, acid vibes and a bold, driving energy. I’m actually somewhat struggling to come up with words to describe this track, that’s how vibrant it is!

Rolling into the final stages of the album and the closing track “Bonjour” farewells listeners with a slow, yet beautiful vibe. The ‘shimmery’ sounds paint a clear picture in my head of disco balls spinning and people dressed head-to-toe in metallic moving slowly on the dance-floor. I also couldn’t help but notice a similar vibe to Kölsch’s track “Bappedekkel,” and if it’s true that Rik pulled influences from the Danish producer then I’ve gained even more respect for him! Nonetheless, “Bonjour” is a salient and even sentimental way to close this trippy, sonic journey that Geck-o has taken us on.

May we have the final verdict, please?

Yes, you may. To put it plainly, I LOVED “Alien Sound System.” However for all the Hardstyle die-hards out there expecting 100% Hardstyle, you’d probably want to give this one a miss because you’re not going to get it here. On the other hand, for individuals who love music and its endless possibilities, I really suggest you give Geck-o’s album a listen – who knows? You may come to realise that Berlin’s underground is your new calling!

Before we wrap things up, I’d like to personally congratulate Geck-o for this spectacular piece of work! Hardstyle is a difficult genre to bring experimentation to, so I’d just like to commend you on the way you’ve opened up the minds of your fans.

“Alien Sound System” is now available through streaming portals Soundcloud and Spotify and also available for purchase on Bandcamp: thefunkycat.bandcamp.com/album/alien-…em-catlp001d

For all of you vinyl lovers, you can also purchase the album on 2×12″ vinyl at the following link: thefunkycat.com/aliensoundsystem