First-timers take on Masters Of Hardcore – Raiders Of Rampage [REVIEW] 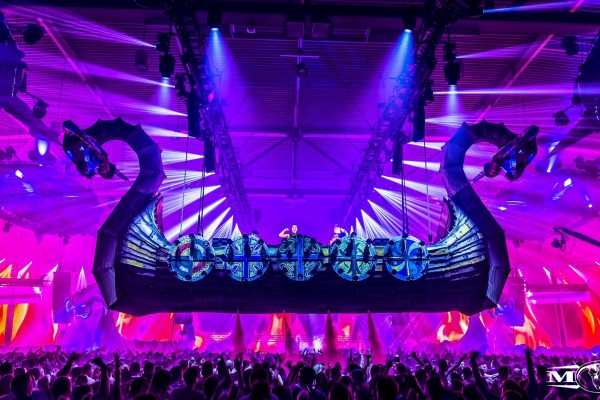 First-timers take on Masters Of Hardcore – Raiders Of Rampage [REVIEW]

Written by: Mike Damen & Marloes Bovenkamp (AKA, the power-couple)

It was on this day, the 26th of March, we woke up knowing that in a matter of hours we would be heading towards one of the biggest harder styles experiences known to men: Masters Of Hardcore. Serving as the symbol for this epic event, the mighty skull makes every hardcore head excited to the max and it’s an understatement to say that Masters Of Hardcore is one of the most important events of the year. For us, it was we were about to witness the spectacle of MOH for the first time, so we vouched that we would enter the venue with the idea that ‘anything goes.’ So without further adieu, we’re going to bring up some memories of this fateful evening as we share our experience of Masters Of Hardcore – Raiders Of Rampage…

The adventure already started way before we were even within a 10km radius of Brabanthallen. We wanted to arrive at the venue early, however due to a heavy accident on our way, we were stuck in traffic on the highway for one and a half hours! Vexed in our nature, things got a lot worse when we heard that it was possible that the road may not be cleared until the morning. Are you kidding?! This cannot be happening, not tonight! As we were making plans to sleep in our car, some guys who were headed the in same direction found a detour behind the gas station and via a small town. We drove through a meadow and somehow ended up in a village, however from there we found a road and it led us on our way again, fuck yeah, we were back on track!

After the stress that we wouldn’t make it, we rushed our way across the huge parking area. On our way to the entrance we saw people getting in the mood, throwing small car-parties which even got us in the mood to party again! Once we hit the entrance and did the usual ‘locker duty,’ we finally made our way through the doors of Masters Of Hardcore: Raiders of Rampage. 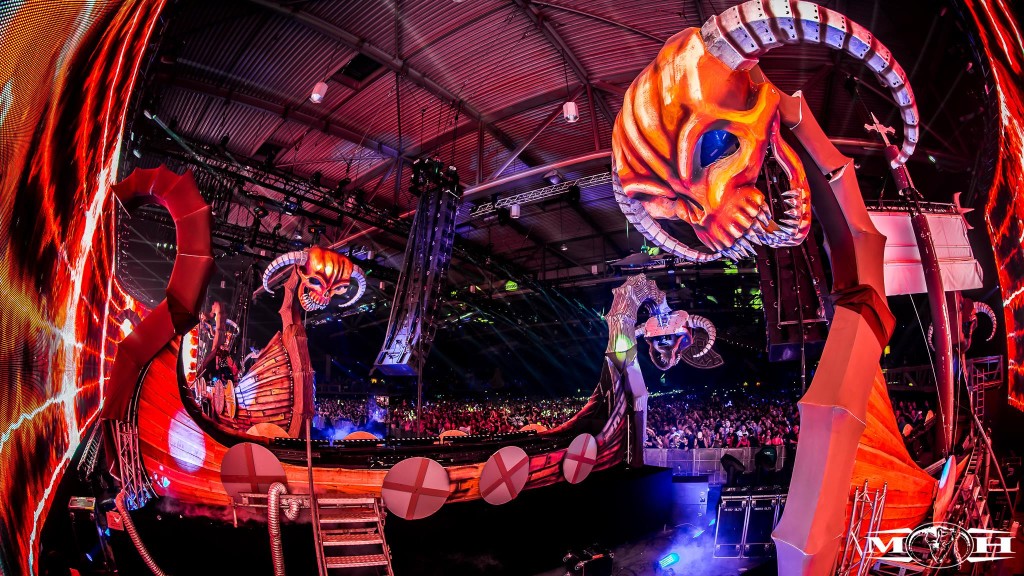 At exactly 1:29AM we entered the colossal mainstage arena to witness the entrance of this year’s anthem creator, Miss K8. After Digital Punk’s unexpected entrance at Supremacy, we expected big things from Art Of Dance… and guess what? They definitely delivered! The first thing that struck our eyes was a gigantic ship hovering above the crowd; we blinked our eyes a few times to ensure that this wasn’t just a crazy illusion… It was real… A freakin’ ship! What we got served next was something so next level that I can’t even begin to describe it other than it was without a doubt one of the biggest intros we’d ever witnessed! The ship moved even further above the crowd, supported by the official anthem and a huge set of lasers, lights and strobes. Judging by the stunned looks on everybody’s faces in the crowd, we could see that others were just as blown away as we were! Art Of Dance really worked hard to give visitors something memorable and they executed it perfectly.

This entrance paved the way for what the night was yet to bring and let me tell you, the excitement was real. One thing that we couldn’t help but notice was the huge amount of diversity in the crowd. I’m talking full-time ‘gabbers,’ casual fans, girls in nice dresses – it was as if everybody was here to simply enjoy the music. In that moment it all became clear why people told us that ‘unity’ is one of the most used words to describe Masters Of Hardcore; it didn’t matter who you were or what you were wearing, everyone just wanted to fucking party! 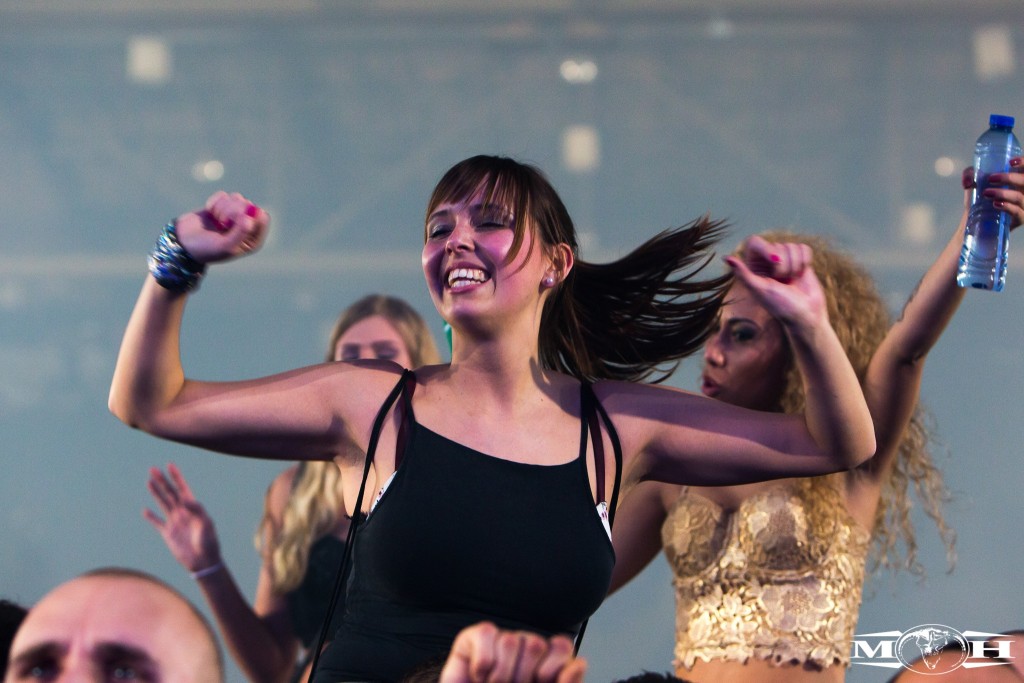 We headed outside of the crowd to refuel at the delicious food-stands before heading into the ‘Runes Of Repercussion’ to witness some lovely early rave!

DJ Paul Elstak was smashing out some huge golden oldies and the vibe at that stage was awesome! Also, I can’t forget to mention the incredible sound system – it was so hard to not enjoy ourselves in this area! Something that we always love to see are the miniscule details that event organisations use to make the party interesting and the signs, dark figures portrayed on the walls and epic decorations on the roof are just a few small details that we were especially impressed by! It’s the small things that come together to create a parallel world, so kudos to Art Of Dance for really bringing the theme to life and transforming the Brabanthallen into a Viking sanctuary!

Next to the Early Rave area there was the highly discussed raw hardstyle area. Despite the fact that people preach that MOH should be about Hardcore only, once we entered the area we could see that the vibe was booming and nobody seemed to give a fuck! We mainly wanted to witness performances by Warface and High Voltage and as both acts have backgrounds in Hardcore, they totally wrecked the Masters Of Mjolnir area! For some people, this Raw Hardstyle addition may cause some growing pains, however we agree that it was truly a great addition to the party. 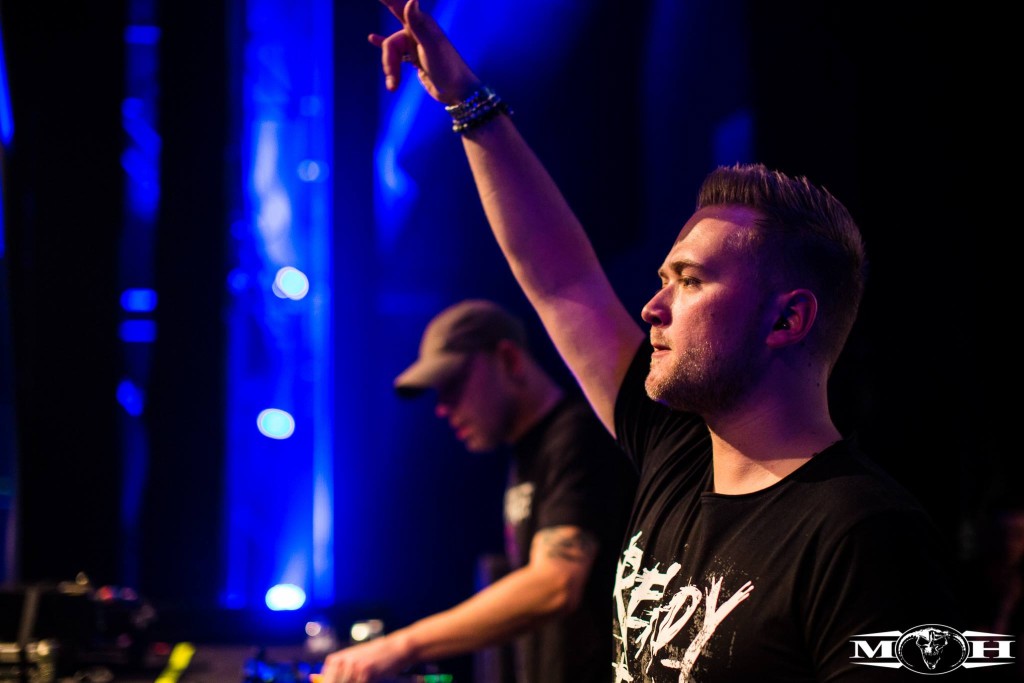 We were absolutely blown away by the Raw Hardstyle area, so we decided to try out luck with the Sonic Slayers area, where we soon got served with the most nasty snares and kickdrums. The area was absolutely packed with fans awaiting the very first appearance of Scarphase, a brand new act by Hardcore legends Partyraiser and F-Noize. We always loved this battle between these two kings of the core, however this new act was something else… Not only was it awesome to see two good friends combining their forces for a new unique experience, but let me tell you that the vibe was seriously intense and not for the faint-hearted! The music that Scarphase pumped out of the colossal sound system was not something to ‘chill out’ to – it was made for party people to move their asses! And just how we like it: little breaks and maximum, demolishing kicks!

We survived the wrath of Scarphase, so another chill-out session (and some more food) was definitely in order! After resting our legs for a couple of minutes, we knew it was time to push the tempo that little further – Siege Of 885. Smaller? Yes. Softer? Fuck no! There was nothing but great vibes and we got the feeling that everyone was either united or knew each other, ha-ha! Although the atmosphere reached such a special level of underground darkness, the amount of joy the attendees were having was incomparable to anything we’d previously seen. Up on the decks and showing people the time of their lives were an energetic act that goes by the name Bit Reactors. You could tell that the guys were enjoying this performance so much and that made us go twice as crazy! However, we must admit that this area really drained our energy levels to almost empty; I mean, there’s no stopping in here! It was all driving kicks, weird noises and 200% energy!

In the early hours of the morning, Masters Of Hardcore was slowly entering its final stages. Before we partied our way over to the mainstage we visited I:GOR, who was performing in the Sonic Slayers area. There was only one word to describe it – filthy! I:GOR was violently tossing nasty kicks at our faces and the amount of times we saw another member of the crowd flashing their biggest ‘Ohhh, this is so nasty’ face was epic. 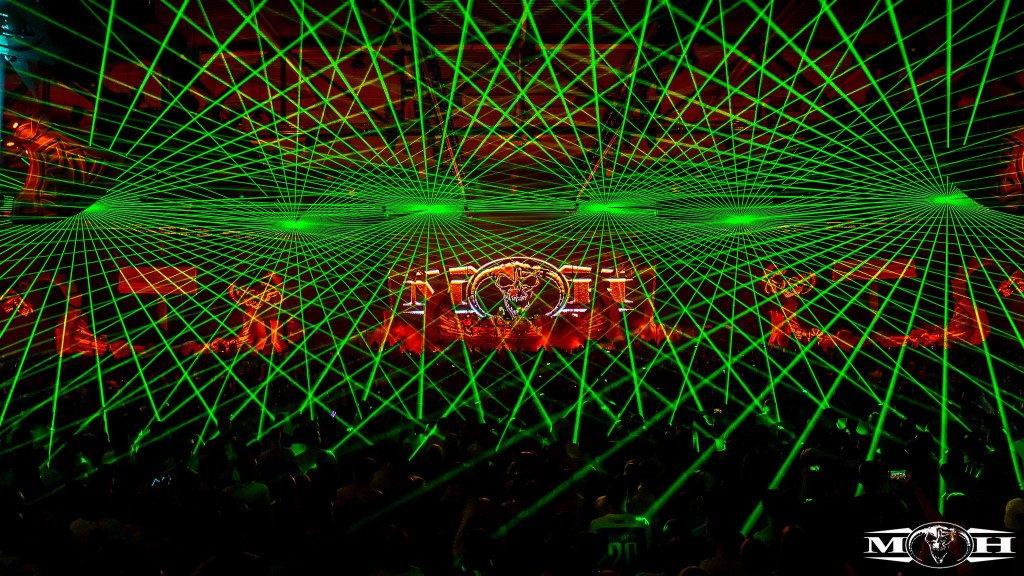 We made one final walk-through of the immense Brabanthallen and decided to spend our final hours immersing ourselves in the mainstage madness. Second last in line was the back-to-back set between DaY-már and Unexist. For us, this was the real highlight of the night; two amazing artists in a Viking ship accompanied by the amazing effects, lightshow and of course, the mindblowing, blaring sound system. To be honest, we couldn’t wish for anything better. Once again I must bring up the word ‘unity’ because after this incredible night it became totally clear to us that Masters Of Hardcore displays cohesion like no other event. Everybody around us was busting out the most insane moves, not caring what they looked like and this alone gave us one last boost of energy. 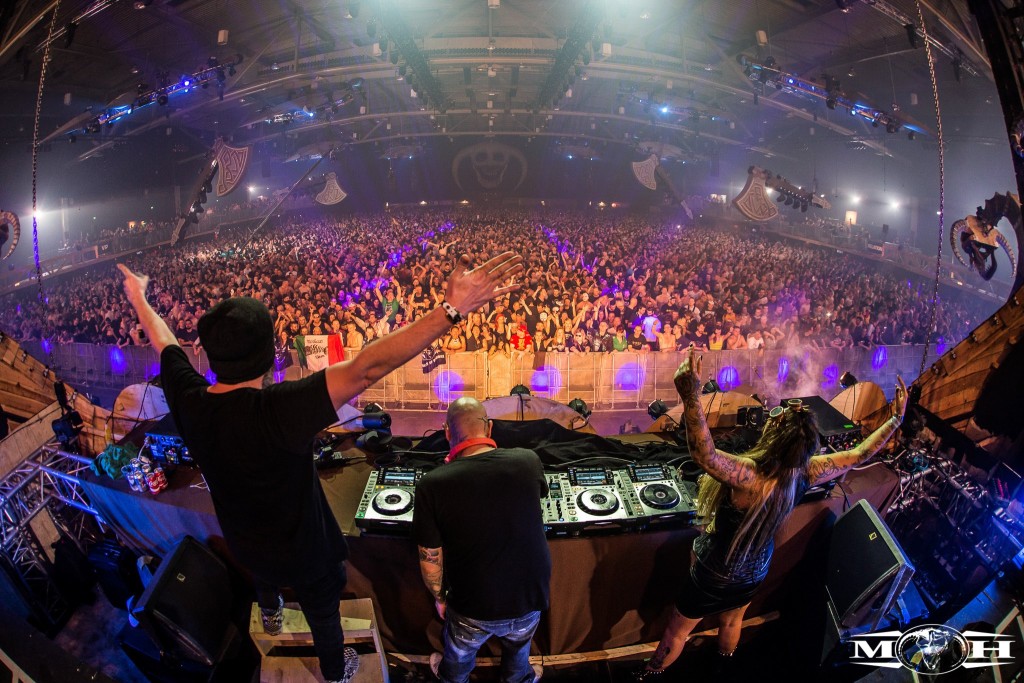 Concluding the night was the legendary combination of Partyraiser vs. Destructive Tendencies. If you could leave it to someone to push it to the limits, these guys are the ones. Presenting us the roughest hardcore gems in combination with the out-of-this-world production, this closing represented everything Masters Of Hardcore stands for.

Wrapping things up, the end-show was the cherry on-top of this unforgettable evening. Guided by fireworks and one final applause, the ending of this story was told…

Personally, Masters Of Hardcore proved why it’s such a renowned event and hopefully it will be something that the ravers of tomorrow will have the opportunity to witness.

Thanks to Masters Of Hardcore and Art Of Dance for making this initial visit possible; we loved the event and can’t wait to see what’s next for this organisation! 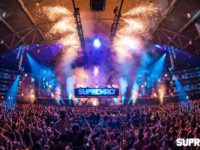 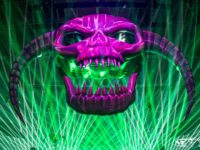 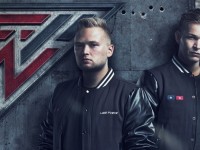