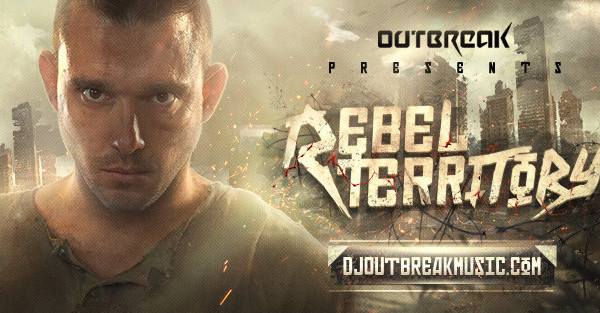 Holding the recognisable title as “Mr. Bassface,” JP Pirrello, or better known as Outbreak has proved to be so much more than a one-hit wonder. Striving to combine melodies with slamming kicks, Outbreak prides himself on being different from the rest and his upcoming EP is sounding pretty damn promising! With the announcement fresh and finally out in the open, we had the honour to pull aside this Aussie hero to chat about “Rebel Territory” and its concepts, his past alias Nitrouz and much more!

1. Hi JP! Thanks for the interview! First of all, how are you going?
I’m going great thanks! I’m also a little relieved that I’ve finally announced my new EP! It’s been on my mind for the past few months so it’s great to get that news out in the open.

2. Oh yes, the EP! Can you tell me a little bit more about it?
I can definitely tell you more about the EP! First of all, it’s called ‘Rebel Territory’ and in terms of the concept I really wanted to express myself in a new way and also become separate from the crowd by bringing my own sound through and not following any ‘norms.’ With the EP I had the sole focus of bringing in some unique and original elements to the tracks, yet still retaining the Outbreak sound. Part 1 of the EP will consist of 3 solo tracks, 1 collaboration and 1 remix from a huge artist! And guess what – there will be plenty more to come! The first preview will be coming in second week of September, so be sure to keep an eye out for it!

3. I just listened to ‘Raw From The Heart’ and I love it! What inspired this track?
I wrote the lyrics quite a while ago during a stage of my life when I was really finding myself again; the music really spoke to me and I wanted to dedicate myself to being different. Something that also really inspired the track was watching people going crazy on the dancefloor at events, you can really see that raw music is in their hearts so ultimately this track is for all the dedicated hardstyle lovers!

4. I also heard that you’re planning a tour!
Yes, that’s right! The concept is to be a small club tour where I travel around with other artists that I’ve been working with on the EP’s. Another new name who will be joining me on stage is Sabacca, who is an MC/Rapper that I collaborated with in a lot of my new tracks. The ‘tour’ is coming to Australia and throughout The Netherlands – we’re currently locking in some dates for the end of 2015!

5. What was the idea behind the ‘Rebel Territory’ concept regarding the artwork and the theme?
As I mentioned, I wanted to put myself out of the norm and me being a ‘rebel’ represented being against the system – however I didn’t want to say “fuck the system,” because its been done before, yet I wanted to give my own take on what I thought being a rebel is. I’m doing things that aren’t normally part of the raw hardstyle scene, for example, my collaborations with Sabacca are quite out-of-the-box and I have also collaborated with an American female rapper from a band called ‘Cunt Mafia’ – she’s absolutely epic! My track with Kronos is also something quite unique and combines a lot of different and unexpected elements. All in all, I wanted to give something back to the scene that’s different and evolved – not just the same kick, screech and movie vocal.

6. I’m really curious about your collaboration with the female rapper! How did you get into collaboration with her?
When I was working with Audiofreq in the studio he showed me the track “Reign In Ratchet” and it was so great that I decided to send her a message with my idea and she was straight onto it! It was awesome working with her and we’re going to do a video clip in a similar style!

7. Do you feel like you have any huge potential hits in ‘Rebel Territory?’
I don’t know, I can never pick them! For example when I made “Bassface” I didn’t expect that to be a hit. However, I’ve had a great response so far from “Raw From The Heart” when I’ve played it.

8. Just speaking about “Bassface” a little more – do you think it’s a bit dangerous to release such a huge hit and be able to keep up with the public’s expectations?
I actually get a lot of requests to make a “Bassface Part 2” but the thing is, I didn’t even mean to make “Bassface” part 1 in the beginning! I was sitting on the couch when I thought of the vocal and then recorded it on my phone – to be honest it wasn’t anything too special. I do hope that I have that luck again, however I really want people to enjoy the music for itself.

9. You recently worked on some music with Italian producer Kronos. What was it like working with him?
It was really fun! I went and stayed at his place in Italy for a few days and his mum was cooking us pasta for lunch & stuff so that was really epic, mind you i couldnt really communicate with his family as they didnt speak english which was quite funny. Even though my family is from italy i cant speak it. It was cool, wespoke online for a while and worked on skype for a while with the Sabacca vocals then i went there to finish the main track off and brought it back here to put the outbreak touch on it – while we were there we also did “Wake Up.”

10. Do you feel as though raw hardstyle is becoming more and more competitive with all of the new talent? opinions on the scene
To be honest, I feel as though the raw hardstyle scene is becoming a little too overpopulated, I mean there are some great new producers coming through but I notice that when I do the A&R for WE R Raw, I hear that a lot of the submissions we receive use same kick, same screech and same drop, so for me, I always look for more out-of-the-box stuff – this is what I want to hear from new producers! In my opinion, people need to expand their thoughts on raw hardstyle and music all together.

11. Can you tell me more about being the A&R for WE R Raw?
Every week differs, sometimes you get really slammed with loads of demos and sometimes it’s a little more quiet. What I’ve found is that we receive promos through many different platforms that aren’t necessarily through the website, such as at parties or through general networking. I’m also always on the look out for new talent – for example if I see that a young producer’s track comes up in my Facebook news feed I will always listen to it because you never know what you’re going to find!

12. You moved to NL quite a while ago – what are the 3 most annoying things about living here?
– Weather: Australia has way better weather.
– Food: Coming from an Italian family back home who always cooked awesome food it took me a while to adjust to the cuisine here. The worst thing was the BBQ’s here – I mean, fuck, get some real steaks in your life! It’s just not the same…
– Karnemelk: This is the most vile shit that I have ever tasted in my life. If i wanted to drink sour milk I’d leave it out in the sun for 5 days… Oh, and they also made a yogurt from it too – it’s disgusting.

13. What do you miss most about Australia?
My family and friends, of course.

14. If you could team up with one artist for an exclusive live-act, who would it be and why?
That’s a tough one! I’d definitely team up with Jack U because their music is so out-there and different to what everyone else is doing! I’ve been listening to their album on repeat – it’s so inspiring for me! 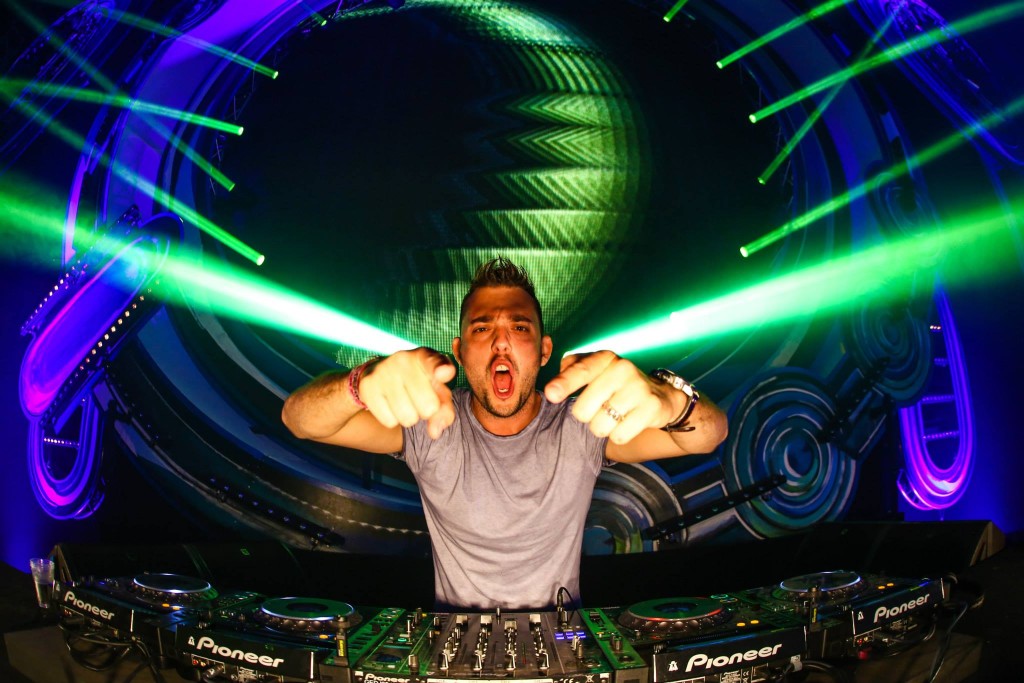 15. I now want to do a little #TBT and talk about your former alias Nitrouz. What was the reason for the change to Outbreak?
I don’t usually like to brush on this too much as I don’t like living in the past, however I felt like I needed a change in my life at that time – I didn’t know where I was going music-wise and I felt a little lost. With the Nitrouz project, I had come so far with it but it wasn’t satisfying anymore so I sat down with some colleagues and they convinced me to work on something fresh and Outbreak was the result of that! I’m so satisfied that I made something new, I couldn’t be happier with Outbreak. I’ve had so many amazing opportunities and I also have a great fanbase who have followed my journey. It was tough to create everything from scratch and gain my fanbase all over again but I’m very glad I did it.

16. Where is the strangest place you woke up after a huge night out?
I woke up in a public toilet once.. I passed out on the toilet after a heavy night out and then threw up in the sink… Classy…

17. What was it like growing up with an urge to make music? Were your parents supportive or did they hate hardstyle?
My Dad hated hardstyle with a passion! One day, I decided to go and buy all of my studio gear and set it up in the living room… It stayed there for about five years, which my parents weren’t happy about, of course! Back then, like any parent would say, they urged me to ‘get a real job’ but now they are extremely supportive and have supported me throughout my move to The Netherlands. Performance-wise, my Mum has also come to a few gigs with me, my Dad visited one and ended up getting drunk with the security guard!

18. When was your first kiss?
It was in Kindergarten behind the building.

19. Finally, what did you eat for brekkie?
I had muesli with yogurt and a cup of coffee. It’s pretty much the same thing everyday!

Thanks for chatting with me JP! I wish you the very best with the EP and I can’t wait to hear what musical tricks you have up your sleeve!